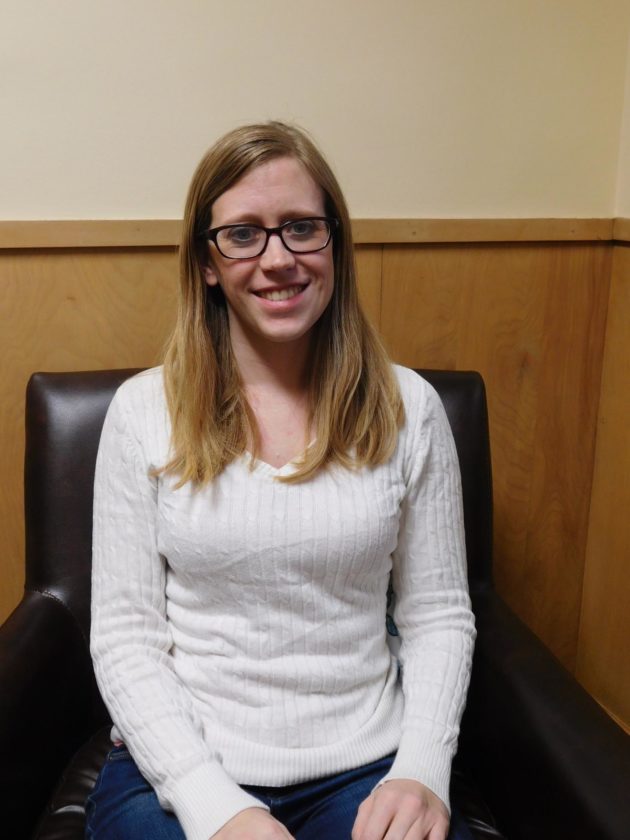 Kimmel is seeking the DFL endorsement for the election. At this time she is the only candidate seeking the House seat. If endorsed by the DFL, she will go head-to-head in the general election against GOP incumbent Paul Torkelson.

Kimmel graduated from New Ulm Public High School in 2003. She received her bachelor’s degree in 2007 in Duluth, before obtaining her master’s degree at the University of Wisconsin, Superior, in 2010. She worked in Duluth in multiple mental health positions before moving back to New Ulm in 2014. Since then, she did mental health work for Counseling Service of Southern Minnesota and in August began working at Mankato’s Five Rivers Mental Health Clinic. In her spare time she teaches yoga and takes on therapy clients at the New Ulm Wellness Collective.

Kimmel decided to run in the aftermath of the 2016 general election. Kimmel said the last election left her frustrated as it was extremely negative and did not represent her views.

“I had this feeling that I can’t sit on the sidelines anymore,” she said.

In an effort to channel that frustration, Kimmel attended the Women’s March in St. Paul last January. From there she began contacting others who attended the march.

“It felt like there was one calamity right after the other every single day,” Kimmel said, referring to President Donald Trump’s administration. The new administration gave her a feeling of hopelessness, but the Women’s March was a positive and inspiring event. She chose to reach out to others who attended the march to discuss what to do next. This lead to the creation of Minnesota Voices Marching forward. This group has now grown to over 220 members in the region.

“What really became apparent is, we needed someone to run for these political office seats,” Kimmel said. They decided to start a movement at the local level and after a conversation with Rep. Clark Johnson, Kimmel chose to run.

Kimmel is aware she has a long road ahead. Her section of Minnesota typically votes Republican, but she believes grassroots efforts will make a difference, and the number of people supporting her is unlike anything the DFL has seen in this area.

“No one in this region has built a campaign the way I have,” Kimmel said. As a New Ulm native, Kimmel has many local contacts through friends and family, as well as the support of the Minnesota Marching Forward group.

“I wouldn’t run if I didn’t think I could win,” she said. “What party people have voted for in the past is much less important to me than what they see the future of the community looking like, and I want to be a voice for that.”

Kimmel feels her work as a therapist makes her a strong candidate.

“I genuinely have an interest in caring for people and listening to people and then figuring out how to help,” she said.

The ability to focus on people and find common ground will help serve her constituents.

Asked about the top issues facing Minnesota, Kimmel cited the rising costs in health care as her top concern.

“It’s not okay that people have to crowd-fund their medical bills,” She said. “When people have cancer and they have to ask their friends to make donations online, that is not okay. That is a broken healthcare system.”

Kimmel feels the Affordable Care Act has given more people access to insurance, but the premiums are out of control. Kimmel favors the single-payer healthcare option also known as Medicare for All.

Kimmel believes the single-payer option will provide quality medical care for all and cut costs by eliminating the bureaucracy in negotiating costs.

Other issues Kimmel will fight for are the accessibility and availability of housing across income levels and childcare.

“Both of those issues are wrapped into our local economy,” she said. “If people cannot find a place to live and can’t find someone to take care of their children, then they will take a job in another community.”

Kimmel had a conversation with a New Ulm resident recently that informed her the childcare waiting list is nine months. This means a family would need to be on a waiting list before they are even pregnant.

Kimmel supports local efforts to fix this problem, but believes the legislators in St. Paul need to work to help eliminate these barriers across the state.

Highway 14 is another source of frustration for the district. Kimmel commented that current 16B Rep. Paul Torkelson was the head of the Transportation Committee and still unable to get the four-lane expansion for Highway 14 to New Ulm. The four-lane currently ends in Nicollet. Kimmel said she would work to complete the Highway 14 corridor.

Recently the issue of sexual harassment has taken center stage in politics. Complaints of misconduct have been reported across the nation, including Minnesota.

Kimmel said the community needed to listen to women who come forward and elect more women to legislative offices.

“When women are such a minority, I think it makes it harder to speak up, and since half the population is women, we should have equal representation in legislative bodies as well,” she said.

Kimmel supports the DFL’s position on sexual harassment training for all candidates and elected officials.

“There needs to be a process for examining these claims and rectifying them across the board in a way that keeps people safe.”

Many women like Kimmel have been inspired to run for public office after the 2016 election. Earlier this year, www.mic.com released a video featuring some of the women seeking office, and Kimmel was included in the video. The video can viewed on Kimmel’s campaign page, www.kimmelforhous.com.

Kimmel will hold “Common Ground” meetings at area coffee shops throughout the winter. She invites the public to attend and provide feedback from all perspectives.