NEW ULM — The New Ulm Girls’ Fastpitch Association announced on Monday that this year’s Windmill Classic will be canceled due to the COVID-19 outbreak.

The announcement was made at about noon on Monday on the New Ulm Girls’ Fastpitch Association’s Facebook page and read as follows:

“Due to the current Government requirements the 2020 New Ulm Windmill Classic has been cancelled. We will be back for the 2021 season!”

Board President Tim Loose said that the association held on as long as it could before making a final decision.

“I think we’re one of the last holdouts when you looked at legion baseball and some of the others that have already made the decision nationwide,” Loose said. “We were just hanging on as long as we could and hoping for a reasonable plans to be developed relative to guidelines, but it’s just not there yet.”

While the decision was made not to have the tournament, which was scheduled to be played June 20-21, Loose is hoping that some type of a summer softball schedule can be played.

“There’s a few moving parts to it, we are a part of the Southern Star League and the Southern Star is going to take direction from the governor on how we might be able to proceed,” Loose said. “Also there’s a state organization for ASA that is in the middle of things, too, so we just have to figure out what the guidelines are going to be relative to spacing and how you deal with equipment that’s used by multiple people. But there’s a proposal on his desk to evaluate and get us some direction back.”

Loose said he’s thinking that there is a possibility of having a modified season starting after July 4 and that could last four to six weeks.

Loose said that there was a great response from teams wanting to play in the tournament this year. He said the number was at 35 teams including the New Ulm teams, up from about 28 last year. 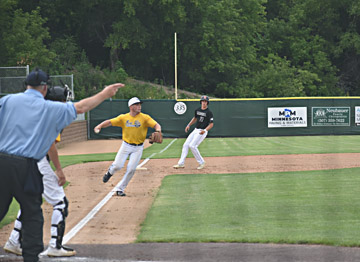