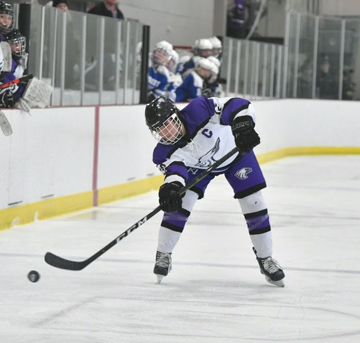 NEW ULM — Ally Steffensmeier decided that the opportunity to play for Natalie Darwitz was just too good to pass up.

Steffensmeier, who was a senior defenseman for the New Ulm girls’ hockey team this past season, will play collegiately for Darwitz at Hamline University beginning next year.

Steffensmeier decided last summer that she wanted to play for Hamline but she was unable to sign any official paperwork because of the COVID-19 pandemic.

The Pipers finished last season 18-4-4 and 14-1-3 in the Minnesota Intercollegiate Athletic Conference. She had looked at a couple of other schools in the MIAC but Hamline was too good to pass up.

“They’re a really strong team in the MIAC and they’ve been really close to winning the Frozen 4 a couple of times so they’re competitive,” Steffensmeier said. “They’re coaching staff is really good, Natalie Darwitz is their head coach and she’s in the hockey hall of fame and played for the Gophers and she played on the USA team. They just kind of rebuilt their program, a couple of years ago they were good at all, losing most of their games, but they’ve come a long way.”

She said that the chance to play for Darwitz and their facilities were the selling point.

At New Ulm High School, Steffensmeier was a five-year starter and she played in 137 career games. She finished her career with 31 goals, 48 assists, 79 total points, 79 penalty minutes and her +/- was +156. She helped lead the Eagles to the Class A state tournament in 2018 and she was on the 14UB team that won a state championship in 2015.