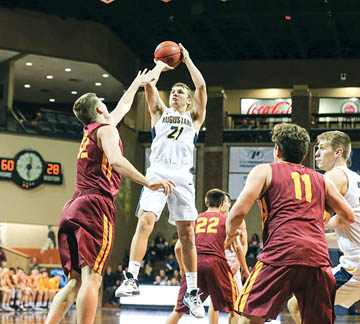 SPRINGFIELD — In his freshman year of basketball at Augustana University, Isaac Fink shrugged off a cold start to the season and regained confidence the rest of the way as he entered the starting lineup.

The all-time leading scorer at Springfield High School finished his freshman season with the Division II Vikings in February, averaging 7.5 points and 3 rebounds per game. He also shot 42% from the floor and 38% from beyond the arc.

“Freshman year, there was a lot of ups and downs,” Fink said. “Obviously I started out the year and I was playing pretty poorly, my confidence was low and I think there was a point midseason where I just got in the gym a lot more, got my confidence flipped back and I just started to play a lot better. And our team started to play a lot better, too. We went through a rough patch in January where that hurt our record a lot, but after that we kind of got rolling and ended up losing to a really good Northern [State] team that ended up winning our conference tournament. But we hung in there with them better than any other team and I thought we ended the year really well.”

In the season-ending loss to Northern State in the Northern Sun Intercollegiate Conference quarterfinals, the Vikings were tied with the Wolves late until Andrew Kallman sank a pair of free throws with just seconds left to help lift Northern State to a 68-66 win.

“A guy that was starting ahead of me ended up having a season-ending injury, so once that happened, I knew I had to have a bigger role,” Fink said. “And there was a game in the middle of the year where I had 31 points and I think that kind of just changed my confidence, knowing that I can play and make a difference at that level. From there on, I had played with a lot more confidence, coach gave me a lot more confidence, as well as my teammates. From there I think it really just took off. … They needed that extra scorer after our starter got hurt, and I think I was able to bring that to them — hopefully next year at a more consistent level.”

With the COVID-19 pandemic ending many sports seasons, Fink’s former Tiger teammates had to deal with the rest of their season getting canceled one win away from returning to the state basketball tournament. Springfield was due for a Section 2A finals meeting with New Ulm Cathedral when the Minnesota State High School League canceled the remainder of the tournament.

The Tigers, who dropped a pair of Tomahawk Conference games to the Greyhounds in the regular season, were looking to get payback for those two losses and make a trip back to the state tournament for the second year in a row.

Fink said it hurt him to see the season end the way it did for his former Springfield teammates.

“I’ve been working out with Decker [Scheffler] and he’s a childhood friend of mine, but seeing that taken away from them, my heart hurts for them,” Fink said. “They put a lot of work in, and I’ve been with them for a lot of that growing up. I was so happy to see how succesful they were this year, and it is hard to beat a team three times, so I liked our chances going in against Cathedral. To have that game taken away from both sides — I just think it was going to be a really good game, I was excited to follow it. To have that as well as all the other seasons end, my heart really hurts for the seniors because that’s some of the best times of your life. I know being really close with Decker and Mitchell [Buerkle] and those guys, they just had a really good senior class and it hurts for them. I hope they have the baseball season, I know it’s not really looking great right now for that, but they really have grown up together, played together. That senior class, I remember out at recess we would always have battled with our class versus their class and they were always a really athletic group.”

Fink is also on the baseball team at Augustana and watched that season get canceled weeks ago. He will, however, get to come back for a fifth year of baseball.

“Initially their plan was to redshirt me because they weren’t sure how well I was going to keep my arm in shape, but we weren’t sure if that plan was going to keep on pace because throughout basketball I was able to keep my arm in decent shape,” Fink said. “I just threw my first bullpen the day before this coronavirus thing ended everything. For me, I was probably going to end up redshirting anyway, so it doesn’t really affect me as much, so I’ll be coming back for my fifth year of just baseball.”

Fink said that in the meantime, he’s just been trying to stick by the coronavirus guidelines and stay in shape at home.

“I’m doing my best to stay isolated from everybody,” Fink said. “We have a nice mini gym downstairs where I work out, I see my dad work out, he’s doing yoga, I’m lifting on the side. And I’m trying to keep my arm in shape. I throw with my brother and we go shoot a lot, so I have a good connection, and Decker actually lets me use his hoop in his backyard. He has a really nice hoop back there, so I’ve been shooting every day, just trying to keep myself in shape and ready to go. At this point, it’s uncertainty for everyone when this is going to pick back up. Basketball might be an offseason, but my arm feels really good … I know our college season is canceled, but town team [baseball], I’ll be around for that. Hopefully we can get that season in and then get kicked off on workouts and stuff.”