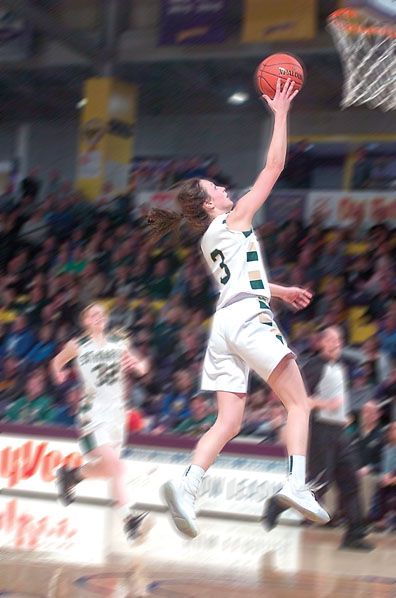 SLEEPY EYE — With a knack for scoring, rebounding, defending and just about everything else a basketball player needs to do on the court, Sleepy Eye St. Mary’s sophomore Madison Mathiowetz has worked her way up to becoming one of the area’s best all-around players.

The standout guard was recently named the Tomahawk Conference Player of the Year for the second year in a row after a phenomenal season that saw her average 29.2 points, 10.6 rebounds, 3.9 assists and 3.8 steals per game. She was also named to the Class A All-State Team this year.

And now she has added another accomplishment to her growing list after being unanimously selected by The Journal’s sports staff as the 2019-2020 All-Journal Girls’ Basketball Player of the Year.

“When coach comes and tells me these things, you definitely appreciate it,” Mathiowetz said of her awards. “But my first thoughts always go to all of these people and opportunities that I’ve been given that have gotten me this far. [My] coaches, my teammates are just amazing and obviously none of this would happen without them. Because when your team’s not very successful, it’s harder to be successful individually. That’s obviously huge for me is having incredible teammates by my side and the best coaching staff we’ve been lucky to have for a long time.”

Mathiowetz’s stellar sophomore campaign has seen her set several school records. After scoring 47 points in a 78-74 double-overtime loss at home to Minnesota Valley Lutheran in mid-December, Mathiowetz set the school record for the most points scored in a single game.

She then broke her own record weeks later on Jan. 3 at home in an 83-79 loss to Buffalo Lake-Hector-Stewart after scoring 50. That loss ended up being the Knights’ only other loss in the regular season.

Mathiowetz also set the school record for points in a single season this year with 817 and has the school record for most career points with 1,923. She first set the girls’ scoring record at St. Mary’s by passing 1,709 points, a record previously held by Molly Mathiowetz, her aunt. She then later passed Sean Mathiowetz, her uncle, for the most career points in school history after she passed his previous mark of 1,838 points.

“They [Sean and Molly] were both there when I did it [set the career scoring records], for both of them,” Mathiowetz said. “I hugged them and they came up to me and just said, ‘I’m so proud of you,’ and said that they’re so thankful to be a part of this. It’s just kind of a fun moment to get to say that you got to share that together and know that we’ve kind of helped each other both ways to get [the records]. I got to cheer them on when I was younger and now they both have kids and they get to come to our games and they got to experience it, too.”

Despite being a sophomore on a team that had no seniors this season, the back-to-back All-Journal First Team member has had to step up into more of a leadership role while continuing to perform at a high level.

“In the past, I haven’t really [felt pressure to lead] because we’ve had some awesome senior leaders and other leaders on the team,” Mathiowetz said. “But every game, I like to put a little bit of pressure on myself to say, ‘You’ve got to come out and you’ve got to play hard and you’ve got to play well, otherwise it could not go well tonight.’ Just as a whole, your team needs you just like you need your teammates. I try not to get nervous, you never want to do that. But there’s always a little bit of that sense, especially in playoffs, it could be your last game and you never want to have that feeling. So I just try to say, ‘Tonight’s the night, go play hard, give it your all and you won’t have any regrets at the end of the night.'”

The Knights finished the season with a 25-3 overall mark and a 79-68 Section 2A finals loss to Waterville-Elysian-Morristown on March 6 at Minnesota State University, Mankato, a game that saw Mathiowetz drop 40 points. Mathiowetz said that the loss was still really hard on the team despite knowing all of the players should be back next season to make another run.

“Obviously that’s our goal [to make state] and we did set ourselves there this year,” Mathiowetz said of the loss to WEM. “We probably didn’t come into that game being very many people’s favorites, but you always want to come in and just say, ‘We’ve got a great shot at it.’ And we had been playing our best basketball at the end of the year. And after the game, it definitely was rough. We have no seniors, but a lot of us got emotional after the game because it’s one more season underneath, and you put all that work in, and when that ends, it’s never fun. Your teammates are like your best family, you spend more time with them than almost anybody else.”

While she has shown time and time again over her career so far that she’s a complete player, Mathiowetz said that her competitive nature still drives her to continuously work to improve herself all around.

“I’m extremely, extremely competitive,” Mathiowetz said. “That runs in the family. I just strive to be the best that I can be every day. It’s really not that I want to be better than my teammates and everybody else, you just want to grow to your best potential, and every single day I ask myself, ‘What can I do today to make myself a better basketball player and person?’ That’s kind of what I go by. And I try to be hardworking, I try to really stay on task and know my goals and definitely just be the best person, player I can be.”

In closing, Mathiowetz thanked her coaches Bruce Woitas, Glen Mathiowetz and Ashley Schieffert, her teammates and all of the Knights’ fans for helping and encouraging her to achieve what she has so far.

* EDITOR’S NOTE: Only players nominated by coaches were eligible for the All-Journal team. No nominations were received from New Ulm Cathedral and Cedar Mountain.