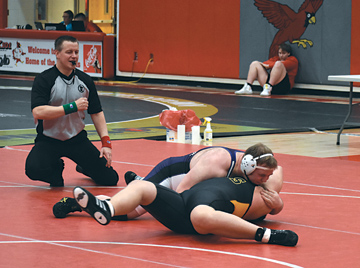 For senior heavyweight Wenninger, this marks his second consecutive state appearance. But for the 170-pound junior Ranweiler, this is a comeback appearance after just missing out on qualifying for state last season.

Ranweiler made it to the state tournament as a freshman in 2018, wrestling at 132 pounds. Despite the two-year, 38-pound difference, Ranweiler said that he’s feeling comfortable going into state his junior year.

“I feel like being there my freshman year gave me a place to start off with,” Ranweiler said. “So now I’m going to feel comfortable when I go back there. It’s not all the glamour of just being there.”

Ranweiler is currently 38-7 with 29 pins this season. He has more than 100 career pins and will take on No. 3-seeded senior Eli Hunt of St. Peter in his first match Friday. 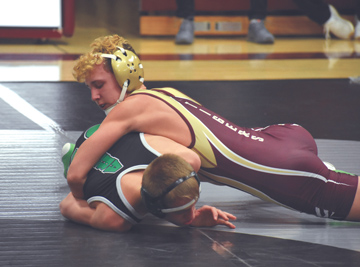 “I know that he likes to throw, so I’m going to have to do my best to not get tossed,” Ranweiler said of Hunt.

Ranweiler also said that he’s feeling confident and is ready to put what he’s learned this year to the test this weekend.

“I’m going to go through trying to do my stuff and trust what I’ve been taught,” he said. “So I’m feeling pretty good about myself right now.”

As for Wenninger, he unfortunately saw his time in the state tournament last year cut short after dropping his first-round match to Calvin Menke and then being denied a wrestleback when Menke dropped his next match. This year, Wenninger said that he knows what to expect right away and will work to avoid a repeat of last year. 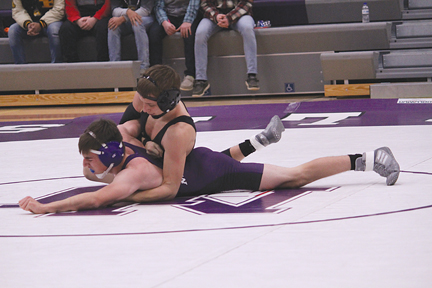 “After last year — qualifying and not doing so hot at state — my goal at the end of the season already was to make it back here and place,” Wenninger said. “I’m more motivated than I was last year as well. I think I was satisfied with just qualifying last year and that is not the case this year.”

Wenninger is 32-13 this season and most recently passed 100 career wins.

He’ll have another tough first matchup ahead of him this year as he takes on No. 2-seeded Dustin Portales of Fergus Falls. Wenninger has beaten guys ranked ahead of him before, however, such as Worthington’s Kyle Mullaney at the Section 3AA meet last weekend. Mullaney was most recently The Guillotine’s No. 10-ranked heavyweight in Class AA.

“I think that everybody is beatable and all I can do is just go out and give it my best,” Wenninger said. “As far as pressure, you can’t really expect anything less. There’s no bad kids at state.”

SPRINGFIELD TIGERS BACK AT STATE

For the first time since 1983, there will be Springfield Tigers at the state wrestling tournament.

While there have been 41 wrestlers from Springfield that have qualified for state before, Al Plotz was the only other Tiger to do so before this season, and he did it in 1983. The other qualifiers were part of a wrestling co-op.

This season, the Class A Tigers will see senior Owen Bertram (120), junior Kadin Johnson (170) and senior Mason Rummel (220) all make their first appearance at state.

Bertram is 43-5 this season with 24 pins, five technical falls and five major decisions. He has more than 125 career wins and several wins over previous state entrants.

He will take on Alden-Conger/Glenville-Emmons senior Kelvin Andrade-Ponce in his first match Friday. Andrade-Ponce is the No. 2 seed and is 33-3 this season.

Johnson comes into the state tournament with a 22-8 record and 14 pins. He will first match up with No. 3-seeded Wyatt Simon of Maple River on Friday.

“We are very proud of these three guys and how they represent our program,” Springfield head coach Todd Bertram said. “We are looking forward to a great state tournament.”

Sibley East will send a familiar group of Class A wrestlers back to state this year in sophomore Drayden Morton, junior Derek Steele and senior Lincoln Carpenter.

All three of these wrestlers represented the Wolverines at state last year. Both Morton and Steele make their third trip to state, while Carpenter makes his fifth appearance.

Morton, last year’s state champion at 106 pounds in Class A, has bumped his weight up to 120 this year and will take on Davis Sunken, 35-6, of Blue Earth Area in his first match Friday. Morton is the No. 3 seed this year and has a 24-3 record.

Morton’s low match count this season is from dealing with injuries that kept him out until mid January.

Steele, the Class A second-place medalist last season at 113 pounds, is 46-2 this season with 26 pins, one tech fall and eight major decisions. He is the No. 1 seed and will first match up with Crookston freshman Ethan Bowman, 35-9, on Friday. Steele also passed 100 career wins this season.

Carpenter, 43-4 with 18 falls this season, enters his fifth state tournament with more than 175 career wins. He is the No. 4 seed at 138 pounds and will first wrestle Nolan Rommel, 33-7, of Wabasha-Kellogg on Friday.

“These three are pretty special, accomplished a lot in their careers,” Wolverines head coach Chris Koob said of his three state entrants. “And [they’re] also the leaders of this team and have been working for this the past 12 months.”

Wabasso/Red Rock Central will send two Class A seniors to the state tournament this Friday.

Werner, a 195-pounder and the No. 4 seed, took fourth last season at 195. He’s got a 33-4 record this season and hit the 50 career-pin milestone at the section tournament last weekend.

He will first take on Michael Doubek, 36-11, of Belgrade-Brooten-Elrosa on Friday.

Wagner, 31-6 with 20 pins this year, will first take on the 33-3 Gideon Ervasti of Bertha-Hewitt-Verndale-Parkers Prairie at 182 pounds. Ervasti is the No. 7 seed.

Northquest, a state competitor in 2018 and 2019, has more than 100 career wins and is 24-7 in his senior campaign. His first match Friday will be against Benson freshman Thomas Dineen, 38-1.

Hewitt, an 11-2 senior, will first wrestle the 33-7 sophomore Brady Holien of Atwater-Cosmos-Grove City on Friday.

The individual tournament at Xcel Energy Center begins on eight mats at 9 a.m. on Friday for all first-round action, with all championship quarterfinals and wrestlebacks taking place at 4 p.m. later that day.

At 9:30 a.m. on Saturday, all consolation quarterfinals, championship semifinals and consolation semifinals will begin on eight mats. Later that day beginning at 4 p.m., all individual third-place, fifth-place and championship matches will take place on six mats. The award presentation will follow the matches Saturday.