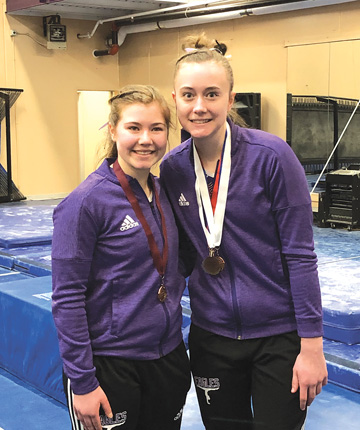 GLENCOE — The New Ulm gymnastics team will have two competitors at next week’s state meet after Emily Guggisberg and Kayla Goblirsch qualified on Thursday at the Section 2A meet at Glencoe-Silver Lake High School.

Goblirsch qualifed in all-around after she took second overall on Thursday with a score of 36.75. She had a score of 9.475 in vault, 8.75 in bars, 9.25 in beam, and 9.4 on floor. She finished first in vault, third in beam, third on bars and third on the floor. This will be the second time she will compete at the state gymnastics meet after qualifying as a freshman last year.

The state gymnastics meet will take place on Friday and Saturday, Feb. 21-22 at Roy Wilkins Auditorium in St. Paul.

MINNEOTA — After Wabasso/Red Rock Central’s 70-9 win over Fulda/Murray County Central, Minneota defeated Wabasso/RRC in the Section 3A tournament on Thursday.