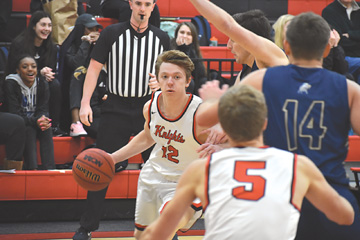 NEW ULM — In the final home game of the regular season, the Martin Luther College men’s basketball team wanted nothing more than a victory.

They managed to get just that.

MLC held off North Central and the Knights picked up their second Upper Midwest Athletic Conference victory with a 64-61 victory over the Rams on Wednesday night.

Austin DeNoyer led the Knights with 17 points and 10 rebounds while teammate scored 14 points. No other MLC player scored in double figures.

While the first half was back-and-forth, the Knights managed to take a 39-32 lead into halftime. MLC finished the game shooting 35.8% while the Rams shot 25.9%.

MLC (5-17, 2-12) is at UW-Superior on Saturday and at UM-Morris next Wednesday. The Knights finish the season at Maranatha on Feb. 22.