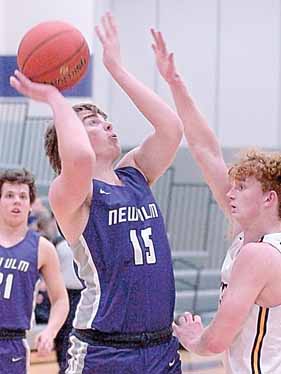 NEW ULM — The New Ulm boys’ basketball team was unable to get much going on Tuesday night in a nonconference game against Hutchinson as the Tigers rolled to an 85-64 victory at New Ulm High School.

Charlie Osborne, coming off of a single-game career high of 19 points in Monday’s win against Belle Plaine, led the Eagles with 17 points. Reece Melby also had 17 points for New Ulm, while Cole Rhode added 8 points.

Hutchinson was led by Russell Corrigan, who had 21 points. Corrigan also became the all-time leading rebounder for Hutchinson midway through the first half when he grabbed his 601st career rebound.

Hutchinson grew its lead to 10 before Osborne drained a 3 and added a short-range jumper to bring the Eagles within 5, 23-18.

Corrigan and Jordan Klinker buried a 3 apiece right after Osborne’s efforts, however, putting the Tigers up 29-18. The Tigers continued to hit shots and led 46-28 at the half.

The Eagles opened up the second half with a 6-0 run to cut the deficit to 12, but that was the closest they got from there out. Hutchinson pressed in both halves against the Eagles, causing enough turnovers along the way to prevent the Eagles from gaining much ground.

The Tigers pressed in both halves against the Eagles, forcing a fair amount of New Ulm turnovers.

It was also “Lace Up 4 Pediatric Cancer” night, with both teams sporting yellow shoelaces for pediatric cancer awareness. Donations were raised at halftime, with bracelets handed out in the crowd and half-court shots for prizes.

While cancer is the leading cause of death by disease among children, less than 4% of Federal funding goes towards pediatric cancer research. For those interested in donating in the fight against pediatric cancer, visit go4thegoal.org.