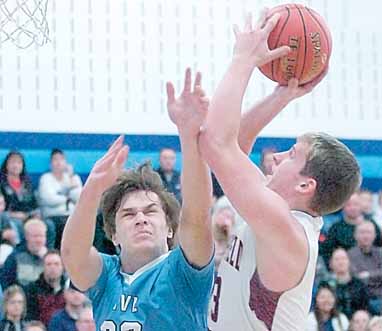 NEW ULM — Even as Springfield led 46-28 at halftime over Minnesota Valley Lutheran at halftime, the Tigers knew that the Chargers weren’t going away in the second half.

The Chargers trailed by as many as 24 points but made a late comeback. They cut the lead to 2 points with 14.4 seconds left, but the Tigers won 79-74 in a Tomahawk Conference boys’ basketball game on Tuesday.

Decker Scheffler led the Tigers with 26 points and 17 rebounds.

Jace Marotz scored 23 points and surpassed 1,000 for his career for the Chargers. Dunwa Omot also had 23 points, had six rebounds, six steals, five assists and three blocks and he was honored before the game for hitting his 1,000th point last Friday.

“It means a lot,” Marotz said of the 1,000 points. “It’s a dream for both of us that we both get 1,000, but now that we got that out of the way, we’re just looking to try to make a run for the playoffs. Individual stats are great, but in the end, it’s all about what you do.”

The Tigers played well defensively in the first half and it showed. They trailed 14-11, but they went on a 10-0 run at that point. Later, a 3-pointer from Dylan Rubey made it 24-16 Springfield and baskets by Scheffler and Mason Leonard put the Tigers ahead 35-19. Rubey finished the game with 9 points.

“Lance [Larson, Springfield coach] said that was the best defense we played all year was the first half,” Scheffler said. “We knew they were going to make their runs, which they did, but we just continued to stay calm and we had a little trouble running our offense, but in the end we came out on top.”

Scheffler’s 3-pointer in the second half gave his team a 54-30 lead, but the Chargers didn’t go away. Back-to-back baskets by Marotz, including a 3-pointer with 14:30 left which gave him his 1,000th career point, gave them some momentum.