Nicollet pulls away in 2nd half against CHS 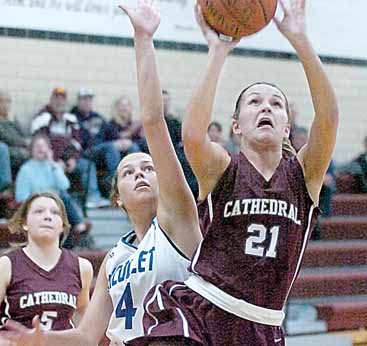 NEW ULM — Despite New Ulm Cathedral coming back from a 10-0 deficit to lead at halftime, Nicollet/Loyola cleaned things up in the second half and pulled out a 45-35 win in nonconference girls’ basketball action.

Frutiger had 12 points for Nicollet in the first half, led by her strong performance in the paint.

“They weren’t guarding us super well on the inside,” Frutiger said. “I think they were more focused on our shooters until Hayley and I started getting it in there and working hard and getting rebounds.”

The Raiders started out strong with a 10-0 lead in the opening minutes of Monday’s contest, led by two buckets apiece in the paint from Frutiger and Selby. Hotovec ended the Greyhounds’ cold spell on a 3 and then added a quick bucket inside before Schommer drove to the hoop for 2 to have Cathedral down 10-7 minutes later.

Cathedral ended up tying it at 14-all after a layup by Reinarts and then took its first lead of the game, 19-18, after a steal and layup by Maddy Gilles. The Greyhounds led 23-22 at the half.

Back-to-back 3s by Weller gave the Raiders the lead back, 30-25, forcing a Cathedral timeout with 14:05 left to play. Nicollet/Loyola grew its lead to 38-29 after a steal and layup by Hulke and a steal and dish from Hulke to Weller for a layup.

While both teams committed their share of turnovers, the Raiders cleaned up their passing in the second half, which turned out to be a key in the win.

The Greyhounds are playing with lower numbers this year and are also without a key player in Sarah Mohr, who is out for the season with an injury. With fatigue setting in more in the second half, Cathedral struggled to take care of the ball and convert on easy buckets in the paint.

“We have to be able to take care of the ball, we have to make our bunnies, it’s just the little things,” Cathedral head coach Dave Wilfahrt said. “And we’re young and we are improving as much as we can all the time. It’s just the fundamental things that we need to keep working on.”

Nicollet/Loyola (7-14) is at Janesville-Walforf-Pemberton for a 7:15 p.m. game Tuesday, while Cathedral (2-19) hosts Buffalo Lake-Hector-Stewart at 7:30 p.m. Tuesday in Tomahawk Conference action. 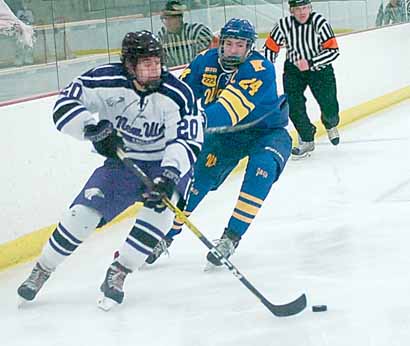