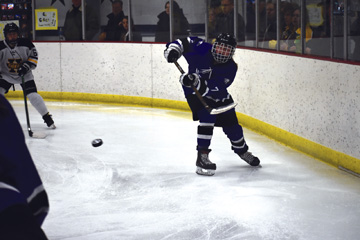 Staff photo by Jeremy Behnke New Ulm’s Evie Sellner clears the puck from behind the net on Saturday in a Section 2A girls’ hockey playoff game at Burich Arena in Hutchinson. Hutchinson defeated New Ulm 3-1.

HUTCHINSON — Down 2-1 late in the third period, the New Ulm girls’ hockey team had a golden opportunity to tie the game.

With a 5-on-3 advantage, the Eagles looked to change the direction of the Section 2A semifinal game, but Hutchinson killed the penalty and got a late goal with 1:41 left as the Tigers advanced to the Section 2A finals with a 3-1 victory at Burich Arena Saturday night.

New Ulm’s only goal in the game came from Molly Scheid, who scored with 16:30 left in the second period on an assist from Morgan Klein.

Hutchinson scored the first goal with 11:53 left in the first period after Alex Hantge scored on an assist from Laina Berthiaume. Hutchinson outshot the Eagles 15-9 in that first period.

Scheid tied the game early in the second period, but the Tigers responded with a power-play goal from Britta Johnson with 9:30 left in the period. Berthiaume and Ainslea Jensen assisted on the goal.

The Eagles missed on their chance to tie the game and Ellie Campbell put the game out of reach with 1:41 left in the game.

Hutchinson outshot New Ulm 26-24 for the game and Ava Brennan had 23 saves for the Eagles.