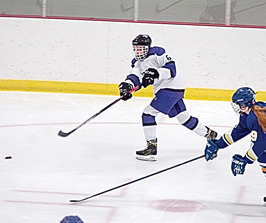 NEW ULM — The last time that the New Ulm Eagles girls’ hockey team played Windom, they outshot them 54-5 in a 4-0 win.

Monday night New Ulm outshot Windom 38-1 as it came away with another 4-0 win in a Big South Conference game at the New Ulm Civic Center.

Brooke Merkel, Alexa Steffl, Molly Scheid and Julia Helget scored goals for the Eagles who improved to 12-0 in conference play and 16-7-0 overall.

Malorie Anderson, Evie Sellner, Maddi O’Connor and Jayda Helget each had an assist.

“That was a pretty ugly win,” New Ulm coach Kristin Faber said. “From the start of the game the pace was not there, the decision-making was not there and it dragged on for all three periods.”

Merkel got the Eagles on the scoreboard at the 12:02 mark of the first period. It was a period that saw New Ulm outshoot Windom 15-0 but only produced that lone score.

Power play goals in the second period from Steffl and Scheid increased the lead to 3-0 after two periods and a 32-1 shot advantage.

“We did not finish out shots,” Faber said. “We did not attack the puck the way that we normally do. We were sitting back and waiting and were not aggressive. And we made some bad decisions with and without the puck tonight.”

Helget’s unassisted goal at the 2:18 mark of the third period increased the New Ulm lead to 4-0.

The Eagles, who play Tuesday at Fairmont, outshot Windom 9-0 in the third period.

“This was not a great overall game for us,” Faber said. “We have to play three good periods Tuesday.”