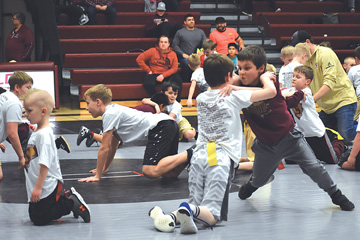 Staff photo by Jeremy Behnke Wrestlers from the Springfield Youth Wrestling Association compete prior to Springfield’s first varsity wrestling match in 32 years. The Tigers were in a co-op with Redwood Valley prior to this year.

SPRINGFIELD — For the first time in 32 years, the Springfield Tigers held a wrestling meet at their home gym without the benefit of a co-op. And Springfield wrestling fans came out in bunches to watch the Tigers compete in a triangular against Lake Crystal-Wellcome Memorial/Nicollet and Pipestone Area.

The Tigers dropped both of their matches on Thursday, dropping the opener to Pipestone 49-28 and the second match to LCWM/Nicollet 42-32.

For Springfield wrestling coach Todd Bertram, it’s been a long buildup for the first home match of the season. The Tigers, who were in a co-op with Redwood Valley last year, broke off this year to become their own team and they had problems scheduling some home matches.

“Going into this year, we weren’t sure if we were going to get a home meet or not,” Bertram said. “We were kind of late putting a schedule together but we were fortunate enough to be able to find two dates, [Thursday] being the first one. Our kids are definitely excited about it, I think just being the Springfield Tigers has been an extra boost as well.”

Fans of all ages packed the gym and the Springfield youth wrestlers also competed before Springfield’s first match against Pipestone.

Paul Dunn, an assistant head coach for the Tigers who is also a former head football and softball coach, was also happy to see the first home meet for the Tigers.

“It’s exciting,” Dunn said. “Just the fact that we have our own team again, we’re so excited. Tiger Pride and all of the things that carry over into this very naturally.”

Springfield senior Owen Bertram has been making the daily trips to practices in Redwood Falls for most of his varsity career. While Springfield usually hosts a meet every year with the co-ops it has been in, it was a good feeling on Thursday for Bertram.

“It’s really nice being able to wrestle in front of our home crowd, having them support us,” the 126-pound senior said. “It’ll be really nice to finish my career as a Tiger.”

Another Tiger senior, Mason Rummel, said that there’s been excitement in the high school surrounding the team.

“It’s really cool getting to start something new,” he said. “Most teams are starting with other people around, but we’re doing the opposite and it’s actually really cool to be that one school that’s trying to do that. Our community has been really supportive, so that’s really nice, getting ready to wrestle in front of everybody.”

Against Pipestone, Owen Bertram won by major decision while Ashtin Johnson, Kadin Johnson, Rummel and Clemon all won by pin.