Both teams played good defense which led to going through scoring droughts periodically throughout the contest. MVL used a full-court zone press while Sleepy Eye had a half-court trap defense.

“It was a nice win for the girls,” MVL head coach Rollin Timm said. “We did a good job on defense holding them to 22 points in the first half.”

Riederer hit another 3-pointer. Crystal Hecht scored a basket, was fouled and she made the free throw to start a 9-0 Sleepy Eye run.

Brittney Dittbenner later scored on fast-break layup off a Charger turnover, Hesse hit a free throw and Mertz scored an inside basket to complete the run.

Riederer hit her final 3 of the night and Abby Nelson’s basket.

The contest started out when Thoms hit a 3-pointer for a 3-0 Sleepy Eye lead. Emma Nelson tied it with a basket and a free throw. Hesse scored two straight baskets to increase the Indians’ lead to 10-6. Emma Nelson scored to cut the Charger deficit to 2 points. Riederer’s two 3-point shots regained MVL’s lead of 14-10.

MVL’s press started to affect Sleepy Eye’s rhythm and the Chargers began to pull away from the Indians. Abby Nelson scored on an outside shot and Pearson canned a 3-pointer with less than 3 seconds left in the first half. 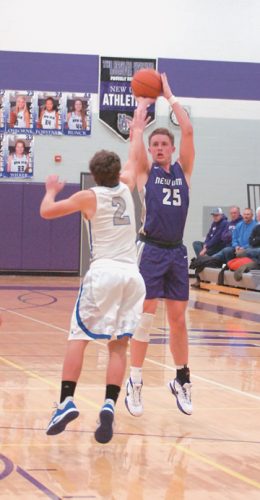