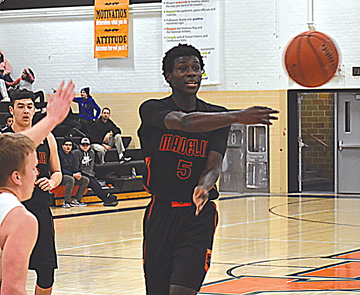 MADELIA — Whatever Ja’Sean Glover wanted to do on Tuesday night against Alden-Conger, the sophomore was able to make it work to his advantage.

Glover went off for a school-record 47 points and pulled down nine rebounds as Madelia defeated Alden-Conger 102-59 in a Valley Conference boys’ basketball game.

Glover scored 23 points in the first half and did one better in the second half, using a complete arsenal of driving to the basket, shooting from outside and free throws.

“I just felt good tonight,” he said. “My teammates encouraged me to keep shooting the ball and keep my foot on the pedal and that’s what I did.”

With his foot stuck firmly on the pedal, the Blackhawks raced to a big lead early and it was easy to see that Glover was in the zone. His 47 points broke the school record of 42 points set by Kendall Peterson and Paul Olson.

The Blackhawks were somewhat tested early on, leading 15-8. But that changed quickly as Glover and company got warmed up. They carried a 46-24 lead into halftime.

In the second half, Glover continued to use his athleticism and speed to his advantage. When he wasn’t driving to the basket, he was able to hit from long range and it didn’t make a difference.

“Whatever the defense gives me, that’s exactly what I do,” he said.

Madelia’s defense was effective too and that led to some easy baskets on the other end.

“I told the guys at halftime we need to discipline ourselves defensively, we wanted to force and up-tempo game,” Madelia coach Jeff VanHee said. “Defensively, I still think we have to get better. They played us man the whole night, and any team that plays us man, we should put [Ja’Sean] out there, he creates so much for everyone else.”

Kurt Lugo had 18 points and Kadin Benzel scored 16 points and had six rebounds for Madelia.

While Glover left to a loud ovation, the loudest cheer of the night came when Blake Altenburg scored on a layup with 19.2 seconds left to put the Blackhawks over the 100-point mark. He also drew a foul on the layup and his extra free throw made it 102-59.

Madelia (4-7) is at Lake Crystal-Wellcome Memorial on Friday.