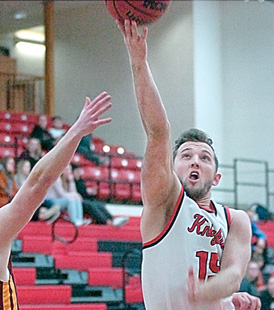 NEW ULM — With his team clinging to a narrow lead late in the game, Martin Luther College senior guard Josh Tomlin helped seal the deal for the Knights.

Tomlin had just 6 points in the game but they definitely came at a crucial time late in the game. It was the third win of the season for the Knights, who are looking to build on the victory.

“It’s been a rough season thus far but coach just keeps telling us to play within yourself and when the time comes, just step up and take it,” Tomlin said. “I did what I had to do, I guess.”

The Knights, who had an 11-point lead (24-13) at one point in the first half, withstood a comeback from the Cobbers. Concordia eventually cut the deficit to 38-34, which is where it stood at halftime.

In the second half, the Cobbers continued to put the pressure on. They led 52-48 on a 3-pointer from Adam Daggett with 13:45 left in the game, but the Knights didn’t panic.

“We’ve been in close games all year, but we couldn’t finish it,” Tomlin said. “Coach keeps on telling us that we have good senior leadership, so we know that if we’re in it at the end of the game, we always have a chance.”

The Knights eventually tied it at 55 on a pair of free throw from Ian Paulsen. With 4 minutes remaining, they led by 3 points on a basket from Jack Heichelbech and they were able to match Concordia’s punches down the stretch.

“That was huge and that was something that we needed to be intentional about changing, just playing more physical, and being tougher and more aggressive,” MLC coach Greg Holzhueter said. “The best part of what we did tonight was even when they made a run, we still stayed aggressive and played physically tough. I was really proud of our guys for that and happy that we were rewarded with a win after playing a physical basketball game and putting as much effort in as they did.”