Greyhounds hold off Knights in Tomahawk 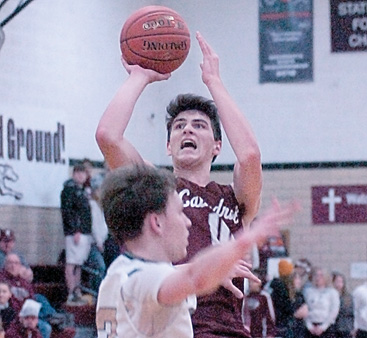 NEW ULM — New Ulm Cathedral put together strong runs near the end of both halves on Monday night to pull away with a 79-70 win over Sleepy Eye St. Mary’s in Tomahawk Conference boys’ basketball action at Cathedral High School.

The Greyhounds (12-1, 7-1) were led by Chris Knowles, who had 23 points, eight rebounds and four assists, and Jon Zinniel, who had 18 points, seven rebounds and five blocks. Also for the Greyhounds, James Gillis had 16 points and Sam Knowles had a 15-point, 11-rebound double-double.

The Knights (7-5, 5-2) were led by Nick Labat, who had 20 points, and Trent Steffensmeier, who had 14 points. Also for the Knights, Carson Domeier added 12 points, while Kaleb Wait had 7 points.

After a 3 by Labat and a free throw from Kyle Goblirsch, the Knights knotted the game up at 53-all with 7:54 left to play. The Greyhounds got two timely steals on back-to-back Knights possessions, however, that led to a slam dunk by Zinniel and a layup by Gillis for a 57-53 lead.

After a St. Mary’s bucket inside by Domeier, the Greyhounds capped off an 8-0 run on a 3 by Gillis to lead 65-55 with 4:53 left to play. The Knights closed their deficit to 74-68 after a 3 by Wait, but the Greyhounds hit seven of nine free throws in the last three minutes to hold on and exit with the win.

“They made a little run there to tie the game in the second half, and we responded, we went on a run [8-0] to pull away,” Cathedral head coach Alan Woitas said. “Credit to both [teams], St. Mary’s, they played well and our kids responded each run they made. Sometimes that’s tough to do, but they found a way to do it each time.”

In the first half, neither team gained much of an edge on each other until the Knights got a bucket inside each from Jacob Lux and Domeier to lead 29-25. That was the largest lead the Knights ended up having all night, however, as the Greyhounds closed the half out on an 11-0 run for a 36-29 halftime advantage, with a buzzer-beating putback by Sam Knowles ending the run and half.

While Knights head coach Judd Walter said that he was disappointed by the run his team gave up near the end of the first half, he was happy with how his team battled the entire game.

“I like the way we battled,” Walter said. “I wish we could have closed the first half out on a different note, we got down 3 and I think they ended on a 10-0 run. That was big, but I liked the way we battled back and competed all the way down to the end.”

The Greyhounds end their first half of Tomahawk Conference play at the top of the conference with Springfield and Minnesota Valley Lutheran. Cathedral hosts Janesville-Waldorf-Pemberton on Thursday night and Norwood-Young-America on Friday night before continuing Tomahawk Conference action next Tuesday at home against Gibbon-Fairfax-Winthrop.

The Knights have another tough Tomahawk matchup ahead of them at 7:30 p.m. Thursday night when they host Springfield.