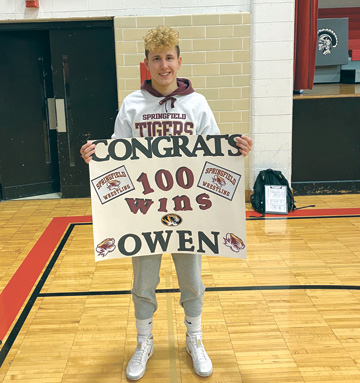 • Bertram picked up his 100th career win of the season on Friday night at the BOLD quadrangular as he went 3-0 on the night. He now has 102 career wins and 51 career pins.

• His three victories on Friday improved his record to 22-1 on the year. He also has two wins over state entrants from last year.

• He finished the week 6-0 with four pins, a major decision and a forfeit. He has 10 pins on the season.

“Owen has been a great leader for us on and off the mat,” Springfield coach Todd Bertram said. “His passion for the sport of wrestling, his great work ethic, and his drive have been a key part to his success this season.”