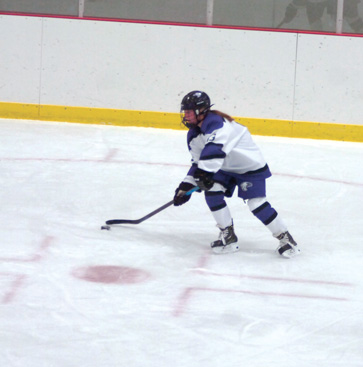 File photo by Steve Muscatello New Ulm’s Brook Arneson skates up the ice in a game earlier this season at the New Ulm Civic Center.

NEW ULM — The New Ulm girls’ hockey team won its third straight game and sixth out of its last eight after it defeated Minnesota River 3-2 on Saturday at the New Ulm Civic Center.

Minnesota River scored the first two goals of the game in the first period, but New Ulm responded in the second and third periods.

Minnesota River went up 1-0 after Emma Seaver found the back of the net at 1:14 in the first period on an assist from Nicole McCabe. McCabe then added to the early lead for the Bulldogs after she scored an unassisted goal at 6:22.

After a scoreless first period, Molly Scheid got the Eagles on the board at 11:21 in the second period. Scheid scored her team-leading 15th goal of the season off of an assist from McKenna Strong to cut the deficit to 2-1.

In the third period, Strong and Maddi O’Connor assisted Julia Helget’s goal to tie the game at 10:13. About 30 seconds later, Ally Steffensmeier gave the Eagles the game-winning score on an assist from Morgan Klein.

Ava Brennan had 11 saves for the Eagles and Madison Kisor stopped 38 shots for the Bulldogs.