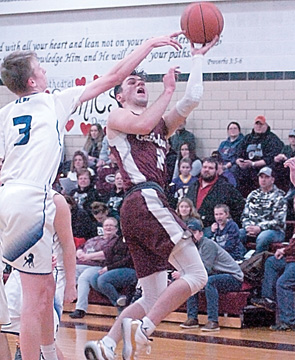 NEW ULM — New Ulm Cathedral jumped to a commanding 40-17 half-time lead and went on to a 77-59 win over Buffalo Lake-Hector/Stewart Friday night in a Tomahawk Conference boys’ basketball meeting.

Chris Knowles led a dominating performance by the Greyhounds with 16 points. Jon Zinniel added 14 points with Sam Knowles ending with 11 points. Sam and Chris Knowles each hauled down 10 rebounds.

“Our kids played well and played with a lot of energy,” said Cathedral head coach Alan Woitas, who saw his team improve to 10-1 in conference play and 11-1 overall. “They made some shots and attacked the hoop early and often and really put a lot of pressure on them defensively.”

That pressure led to 12 Mustangs’ turnovers in the first half and also pressured their shooters.

“We made them spread their offense further out from the 3-point line than they would have liked,” Woitas said. “They never really got comfortable and that was one of our goals tonight.”

The Greyhounds, who host Sleepy Eye St. Mary’s Monday in a big conference game, broke the Mustangs early as they jumped to a 17-7 lead on a Zinniel basket off of a Mustangs’ turnover at the 11-minute mark.

That margin ballooned to 30-9 on a Cathedral 13-0 run five minutes later.

Two more baskets off of Mustangs’ turnover to start the second half had the Greyhounds in cruise control at 44-17.

Cathedral increased the lead to 55-19 on a Chris Knowles’ basket.

“That was a good opportunity to get a lot of guys in the game — we had a lot of different people score tonight,” Woitas said.