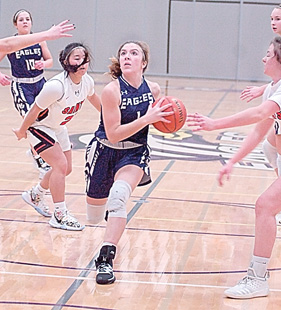 Staff photo by Steve Muscatello New Ulm’s Daviney Dreckman drives to the basket during the second half against St. James Friday at New Ulm High School.

“We had a lot better composure tonight,” New Ulm head coach Brian Batt said. “We had a few mistakes and the girls did a good job with the zone (defense) and we were positive and confident.”

Batt noted the Eagles had a game plan. New Ulm made some second-half adjustments and executed the plan well for the balance of the contest. The Eagles used a half-court double-team defense that gave SJA fits. New Ulm rebounded well in the second half and its confidence shined with the ball dropping into the hoop.

Chloe Mickelson was a case in point. She hit four 3-pointers in the first half, but the Eagle defense shut her down and held her to only one 3-pointer in the second half.

Osborne scored a basket to open the second half to tie it at 31-31. Nesvold scored two baskets and Dennis scored for a 38-31 Eagle lead.

Jaelyn Haler hit a 3-pointer to bring the Saints within 5 points. Mickelson and Taylor Sodeman each made 3-pointers, Kelsey Grunewald scored and Haler canned a 3-pointer and scored on a fastbreak layup, making it 53-52 New Ulm with 7:47 left in the game.

SJA hit a 7-minute scoring drought which ended when the Saints scored the final 4 points of the contest.

The first half featured the Saints playing relatively even with the Eagles. There were three ties and four lead changes.

Mickelson hit two 3-pointers and Grunewald scored for a 28-15 SJA lead with 6 minutes remaining in the first half.

The Eagles chipped away and regained the lead on a Wick basket. Sodeman’s 3-pointer made the score 31-29 SJA at halftime.