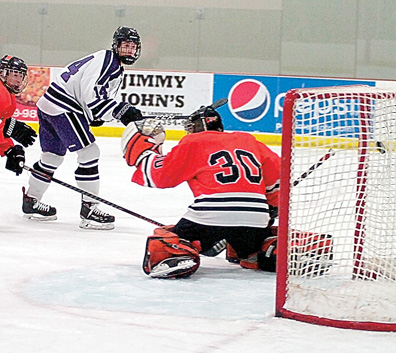 NEW ULM — It was a big win in the Big South Conference boys’ hockey race.

Braxten Hoffmann’s power-play goal — his 11th of the season — at 13:51 of the third period broke a 2-2 tie and lifted the New Ulm Eagles to a 3-2 win over Marshall Thursday night.

This was the Eagles’ second win over the Tigers in conference play this season.

Cade Bushard and Ethan O’Connor added goals for New Ulm as they improved to 7-1 in conference play and 9-4-1 overall.

Hoffmann and Glavine Schugel had assists for New Ulm.

Bryson White and Tristan VanDeVere scored for the Tigers, who still lead the conference with an 8-2 mark.

“This was a big win for us in the section and also to get on back on top of the conference” New Ulm coach Ryan Neuman said. “We gave one away against Luverne so this was a big win tonight.”

But it was Marshall, who looked like they were going to get some payback for a 3-2 overtime loss to the Eagles earlier this season, when Bryson White scored just 54 seconds into the game.

New Ulm tied the game at the 12:15 mark when Cade Bushard forced a turnover in the Tigers’ end and lifted a backhander by Capers.

It was Bushard’s seventh goal of the season.

The Eagles, who host Minnesota River at 4 p.m. on Saturday took their first lead of the contest at the 5:03 mark of the second period on a one-timer off of the stick of Ethan O’ Connor.

But Marshall knotted the game at 2-2 at the 6:14 mark of the third period on a VanDeVere power-play goal as both team’s kept exchanging goals.

“It was a back and forth game,” Neuman said. “The third period got a little bit penalty heavy (seven penalties, six on Marshall) but overall we dominated.”

And one of those penalties was the difference as. with Marshall down a man, Hoffman fired a shot from Capers’ right that got past him for the 3-2 lead.

Marshall pulled Capers for an extra attacker with under a minute left but failed to score the tying goal.

“Kyle (Esser) rebounded nice tonight and made some nice saves on their power plays,” Neuman said. “We have a big game coming up with Hutchinson in a couple of week, but we have a big game Saturday here with Minnesota River.”