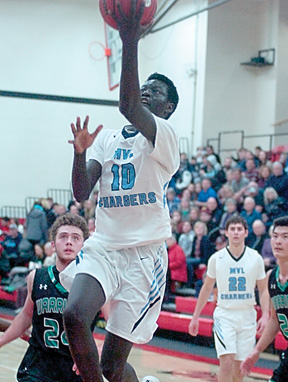 Staff photo by Steve Muscatello Minnesota Valley Lutheran’s Dunwa Omot (10) makes a lay up after getting past West Lutheran’s Christian Schmidt (24) during the first half Thursday at Martin Luther College.

NEW ULM — Minnesota Valley Lutheran remained perfect when it crushed West Lutheran 65-26 on Thursday in the first round of the MLC Tip-Off Tournament.

MVL jumped out to an early 12-2 lead on baskets by Kryeis Harrison, Dunwa Omot and Mason Cox. The Chargers allowed WL one shot at the basket, rebounded and scored. The Warriors missed their first four shots of the contest.

The Warriors came within 6 points on baskets by Keshawn Johnson and Christian Schmidt. MVL answered with a 19-0 run. A WL 3-pointer broke the scoring drought with about 2:30 left in the first half. Omot contributed to the Warriors’ woes, scoring 18 points in the first half.

MVL continued with its recipe for success of good defense, solid rebounding and scoring baskets in bunches.

Jace Marotz scored on two baskets and a free throw and Harrison scored two baskets increasing MVL’s advantage to 53-19 with 9:10 remaining in the game. 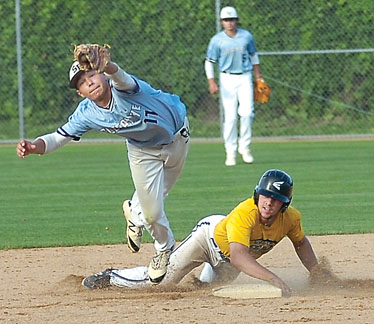