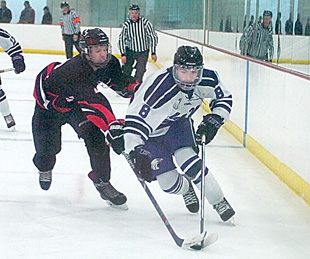 Staff photo by Steve Muscatello New Ulm’s Noah Wilmes (8) tries to get past Jaden Sandgren of Redwood Valley during the second period Tuesday at the New Ulm Civic Center.

For New Ulm coach Ryan Neuman, it was a case of his team jumping to a 3-0 lead after the first 17 minutes and then being on survival mode for the second period.

“It (the second period) was a sloppy period for both teams,” Neuman said. “We have a stretch of games here where we know that we are the better team but we still need to show up and be ready to go.”

Bushard got the Eagles on the board when the Redwood Valley defense turned the puck over in front of Jacobson with Bushard there to put the puck in the net at the 1:03 mark. Hoffmann upped the lead to 2-0 at the 9:05 mark on a wrist shot that found the back of the net. Both goals were unassisted.

Hulke’s goal with 18 seconds left in the first period saw New Ulm with a commanding 3-0 lead and holding a 20-7 shot advantage.

“He played well tonight — he was playing the puck on dump-ins well,” Neuman said. “He communicated well with our defensemen.”

New Ulm wasted little time getting back on track in the third period when Hoffmann got his second goal of the game and his third goal of the season just 31 seconds in. Drill made it 5-0 when his shot bounced off of Jacobson’s skate and into the net.

“I did a complete switch of lines in that third period so we will see how that holds out later,” Neuman said.

New Ulm remains in Big South Conference play when it hosts Fairmont at 7 p.m. Thursday at the New Ulm Civic Center. The game will be played on the regulation sheet of ice following the girls’ game. 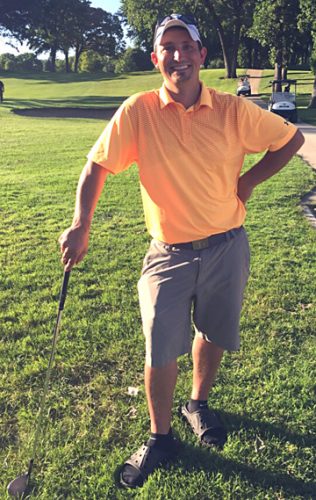 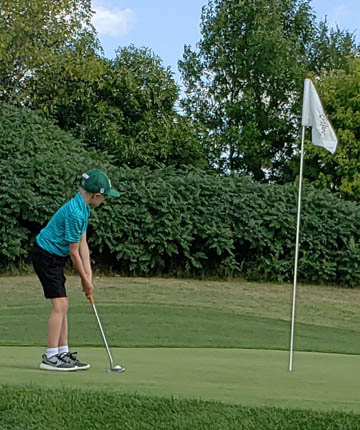