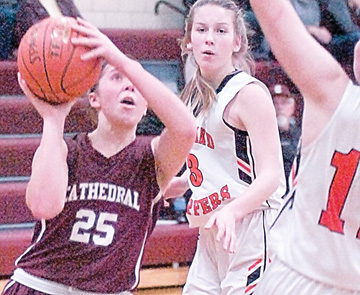 Staff photo by Steve Muscatello New Ulm Cathedral’s Emily Schommer (25) takes a shot after getting past Micah Peterson (3) of Cleveland during the first half Thursday at CHS.

NEW ULM — Cleveland earned its first win of the season when it defeated New Ulm Cathedral 50-40 on Thursday in a nonconference girls’ basketball contest.

It could be called the “tale of two halves” because the game began as a blowout early, became close and remained that way until late in the game.

Emily Schommer nailed a 3-point shot for the Greyhounds with 5:31 left in the second half gave them a 36-35 lead. Schommer was left unguarded just above the key when she took the shot. Schommer scored on the next play, making it 38-35. Cleveland’s Emily Kern answered with a basket. Lily Franta’s basket helped Cathedral possess a 40-37 lead.

A Cleveland player missed the front end of a 1-and-1 free throw. The Clippers got the rebound and passed it to Kaylee Karels who canned a 3 late in the game. That basket gave the Clippers a 6-point lead of 46-40. Ziebarth calmly hit two free throws and then nailed a basket, putting an exclamation point on the Clipper’s victory.

The Clippers used a full-court press in the first half, which created headaches for the Greyhound offense. Cleveland also rebounded well, and it was able to either get the ball or retain possession by hitting the boards. Cathedral head coach Dave Wilfahrt acknowledged that his squad does not have a lot of height, which makes it difficult to outrebound opponents.

Cleveland jumped out to an early 15-2 lead in the first half. Franta dropped in a 3 to bring the Greyhounds within 2 points at 18-16.

Schommer tried a 3 and she was fouled. She hit all three free throws to give Cathedral its first lead of the night with 1:22 left in the first half.

Cathedral (1-2) will host Gibbon-Fairfax-Winthrop on Friday.