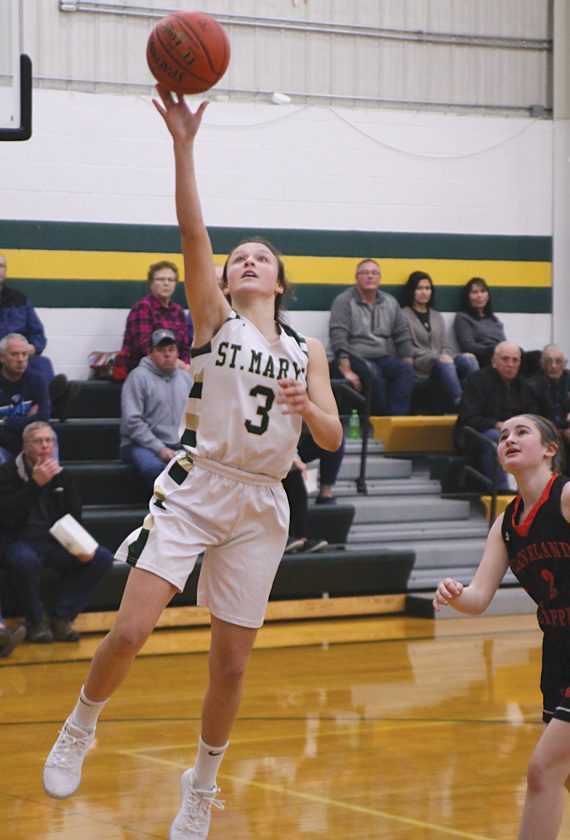 While a pair of free throws by Kallie Phillips had the Clippers down 11-9 in the opening minutes of Saturday’s matchup, the Knights began to improve on both sides of the court after that and went on a 25-3 run to gain major ground and lead 36-12.

That run allowed Knights head coach Bruce Woitas to make plenty of substitutions early on, something that he was allowed to continue doing throughout the game.

“We played 13 kids in the first half and 13 kids in the second half and everybody probably played [at least] eight minutes,” Woitas said. “But I really liked that we had really good balance with everybody getting that 6, 4 points, it was nice to see that. I think we had a number of kids that had 6 and 8 and 4, and I think we had 12 kids score as well, so that was nice to see as well.”

Mathiowetz scored 28 for the Knights Friday night against Adrian/Ellsworth in a 59-41 win and continued to find success on Saturday, getting more opportunities to share the ball and get more open shots.

“We were moving the ball really well, our rotation was working,” Mathiowetz said. “We have a few offenses we are going off of, which helps us get good shots. And then my teammates always get me the ball when I’m open and that’s always the best thing when they’re looking and making good passes.”

Mathiowetz led the Knights in the first half with 13 points.

Despite not applying a full-court press or trap against Cleveland on Saturday, the Knights continued to play strong defense and create turnovers for points in the second half. They took their largest lead of the day, 75-27, after Windschitl converted on an and-one.

Leah Miller and Megan Ahlness each hit a 3 in the second half for the Knights after coming in off the bench.

After back-to-back wins over the weekend, the Knights (2-0) next travel to Martin County West on Tuesday.