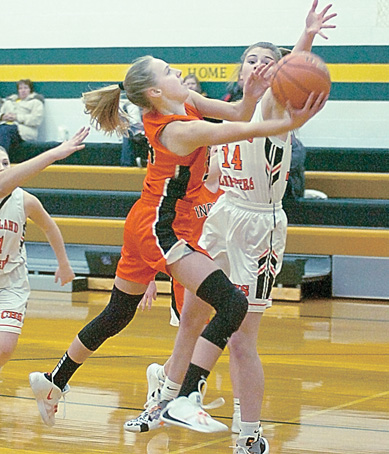 SLEEPY EYE — With a strong full-court press and a balanced scoring attack on Friday night, the Sleepy Eye girls’ basketball team coasted to a 65-26 nonconference win over Cleveland in the first game of the 2019 St. Mary’s Tip-Off Tournament at Sleepy Eye St. Mary’s High School.

This was also a good memory for Indians head coach Sarah Hesse to take home after her first game as head coach. She was happy with how the girls shared the ball on Friday and believes that will be a key going forward this season.

“I think [sharing the ball] will be a key this year because I don’t think we’ll have a standout, I think every night’s going to be a different person that’s going to be leading the charge,” coach Hesse said. “So I hope that continues that way, and that’s what we want — good ball movement, good sharing and everyone’s pretty unselfish, so that’s a good thing to have most of the time.”

While both teams struggled to get shots to fall in the first three minutes of the game, the Indians pressed the Clippers well and jumped out to a 16-0 lead, getting three early buckets directly off of turnovers from the press. Five different players scored during that opening run for Sleepy Eye, with Mertz leading the way with three baskets.

“Our girls had lots of jitters tonight and they were riding high, so I was hoping that that would wear a little of that off, mellow them out a little bit,” coach Hesse said. “But from last year, [Cleveland] wasn’t always the best at ball handling, so we wanted to put pressure on their ball handlers to create turnovers so that we could get a run.”

Cleveland cut its deficit to 11, but the Indians kept things under control the rest of the first half and led 31-15 at the break.

Dittbenner knocked down a 3 early in the second half before a 3 by Thoms prompted an early-second half timeout by Cleveland with 16:48 to play. The Indians continued to share the ball well the rest of the way, growing their lead to 57-21 after a 14-0 run.

Kadence Hesse hit three consecutive 3s late to give the Indians a 63-23 lead with less than eight minutes to go, Sleepy Eye’s largest lead of the night.

The Indians (1-0) continue play at the St. Mary’s Tip-Off Tournament at 4 p.m. Saturday, when they take on Adrian/Ellsworth.