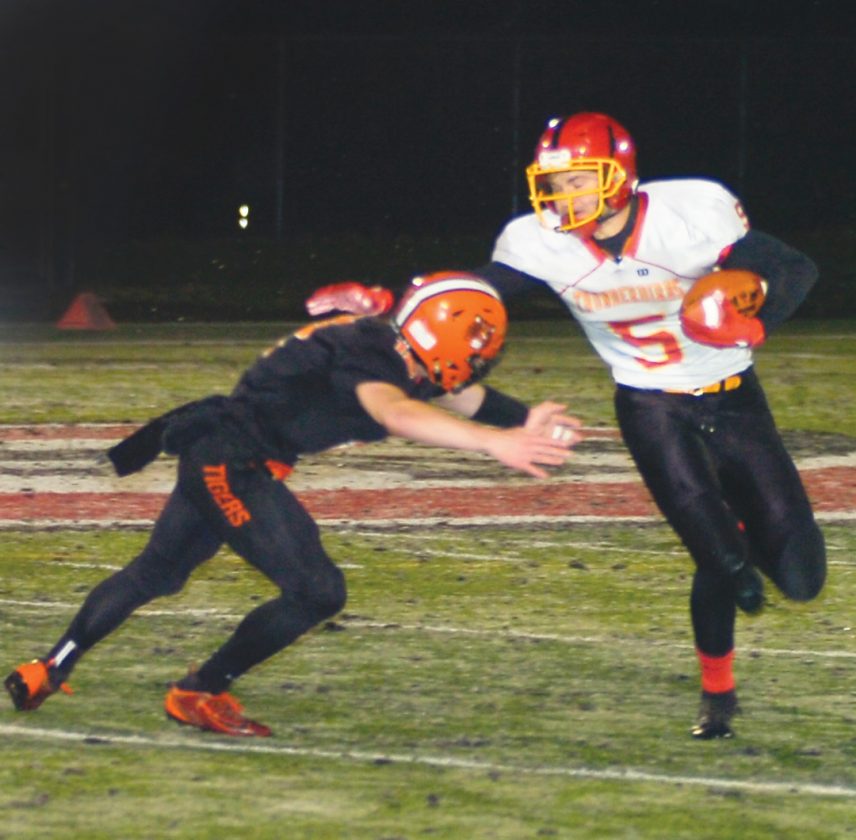 Staff photo by Steve Muscatello Gibbon-Fairfax-Winthrop's Evan Martin tries to get by a Browerville/Eagle Valley defender during the first round of the Class A State Football Tournament Saturday at St. Cloud State University.

ST. CLOUD — In the state tournament, it’s all about making the most of your opportunities.

Browerville/Eagle Valley only had six possessions in the game but scored on five of them as it defeated Gibbon-Fairfax-Winthrop 33-6 at Husky Stadium Saturday night.

GFW’s first state tournament in 10 years was short-lived after the Thunderbirds fell behind early and couldn’t get the offense going.

The Tigers scored on all three of their drives in the first half and built an 18-0 lead at halftime. They only had one punt in the game and that came in the fourth quarter on their sixth possession of the game.

GFW’s lone score came with 5:59 left in the game after JC Munoz scored from the Browerville 2.

The Tigers took the early lead and never looked back.

After a successful 4th-and-1 conversion at midfield, the Tigers ended their first drive of the game with a touchdown to Austin Carr on a 46-yard pass from Cory Meyer to make it 6-0 after the 2-point conversion failed.

On GFW’s next possession, the Thunderbirds fumbled at the Browerville 33 and the Tigers recovered at the 37.

The Tigers took a 12-0 lead in the second quarter after Mason Gode scored his 19th touchdown of the season, ending a 63-yard drive at 8:23.

After GFW’s third drive of the game stalled, the Tigers got the ball into GFW territory again. Meyer had the quarterback keeper from the 14 and got it to the GFW 9 with 34 seconds left. A few plays later, Goede scored his second rushing touchdown of the night from the 2 and gave the Tigers an 18-0 lead with five seconds left in the first half.

Browerville upped the lead to 26-0 after Goede scored his third rushing touchdown of the game on a 56-yard burst up the middle with 8:54 left in the third quarter. They converted the 2-point conversion to complete the 87-yard drive.

GFW had a chance to score late in the third quarter. With the ball at the Browerville 2, quarterback Brody Hentges fumbled and the Tigers recovered with 57 seconds left in the third.

Munoz led all GFW rushers with 97 yards rushing on 11 carries, while Treay Taylor had two carries for 40 yards.

GFW ends its season at 9-3. Browerville/Eagle Valley will play BOLD in the Class A state semifinals at 9 a.m. on Saturday.