Seniors lead Tigers back to state 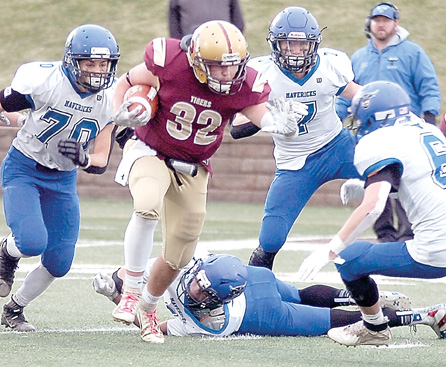 File photo by Steve Muscatello Springfield running back Mason Rummel (32) carries the ball during the Section 3A Championship game against Martin County West.

SPRINGFIELD — And they’re back.

After nearly being upset in the Section 3A championship game by Martin County West, the Springfield Tigers are returning to the Class A state tournament, this time as state tournament veterans.

With 16 seniors on the roster this year, the Tigers (10-0) have plenty of big-game experience back from last season’s state tournament run.

However, they have a tough first-round match-up with Blooming Prairie (10-0), the champions from Section 1.

The Springfield offense has multiple ways of attacking a defense. It all depends on what the opposing defense allows it to do.

“I think our identity is whatever the other team is going to give us, we’re going to take advantage of it,” head coach Bob Fink said.

The Tigers had to fight until the final 15 seconds in the Section 3A championship against Martin County West. There, quarterback Decker Scheffler hit Nolan Hovland in the back of the end zone for the game-winning score in a 23-21 victory over the Mavericks. The Tigers lost to Mahnomen in the Class A semifinals a year ago.

Springfield (10-0) is once again led by Scheffler, a senior who has thrown for 1,911 yards and 24 touchdowns this year. He has also rushed for 400 yards and four scores.

Behind Scheffler are the power and speed combination of Mason Rummel and Kadin Johnson. Rummel doesn’t shy away from contact and has 713 yards rushing on 98 carries (7.3 yards per carry) and 11 touchdowns. Johnson, meanwhile, has the speed to turn any play into a big one. He has 68 carries for 683 yards and four touchdowns (10 YPC).

Fink said that last year’s state tournament run was beneficial for this year’s team too.

“Making the state tournament run last year allowed us to have so many additional practices, which helped develop more talented football players,” he said. “The weight training program that Chad Hovland started after Christmas has paid huge dividends. In summer camp, we noticed immediately how kids were faster and stronger, more confident in their abilities.”

The Tigers have allowed the fewest amount of points in Class A (69 points allowed) and they have four shutouts. Ivan Hovland has 100 tackles, two fumble recoveries and an interception. Rummel has 87 tackles and a fumble recovery and Kadin Johnson has 62 tackles. Nolan Hovland (57) and Curtis Tauer (52) are also two of the leaders defensively.

On the ground, the Awesome Blossoms are led by Matthew Pryor, who has 1,117 yards rushing and 13 touchdowns. Tyler Archer (278 yards) and Bradley Simon (242 yards) also get carries.

Both unbeaten squads are similar in a lot of ways.

“Watching film, they are big, strong, athletic and they run a wide-open offense like we do,” Fink said. “They take what you want to give them and they have a quarterback that’s completing 70 percent of their passes. [They have] Two 6-5 receivers, there are going to be a lot of matchup problems. However, with that being said, we are going to create match-up problems for them, also.”

Having reached U.S. Bank Stadium a year ago and losing in the semifinals, Fink said his team wants one more game this year. But it won’t be easy to get that far.

“The seniors on this team, their ultimate goal is to play on TV and play in the state championship game,” Fink said. “I think we’re going to receive our biggest test this Saturday.”

“It’s really awesome, it was our goal since the beginning of the year to get back up there, so I’m glad it’s finally going to happen,” he said after last Friday’s Section 3 championship game.