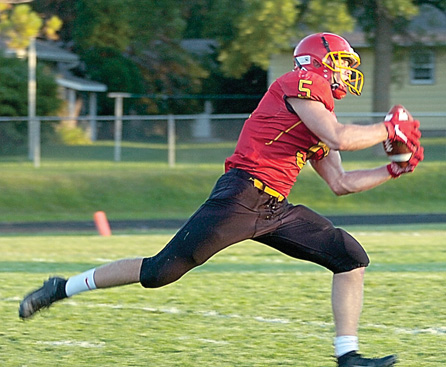 WINTHROP — The culmination of years of hard work paid off for Gibbon-Fairfax-Winthrop this past Friday night when it defeated United South Central to move on to the Class A State Football Tournament.

By beating the previously unbeaten USC, the top seed in Section 2, the Thunderbirds advanced to state for the first time since 2009. They will take on Browerville/Eagle Valley at 7 p.m. Saturday at St. Cloud State University’s Husky Stadium.

GFW head coach Pat Hentges, who was head coach of GFW’s 2009 state team, left his coaching position after the 2013 season and returned in 2017. While GFW had to endure three winless seasons in 2015, 2016 and 2017, the current team has become a powerhouse this year and has climbed back to the top of its section once again.

“Certainly we had some great memories in 2009 and even those seasons that were tough years, I stepped away for a few years and was able to come on back, but I wouldn’t say this is about me,” coach Hentges said. “We’re excited for the kids, we’re certainly excited for the community. Our guys have worked so hard. Our seniors, their first two years of high school football, they didn’t know what winning was, and through their hard work and perseverance and just really staying together and believing in each other, they were able to kind of get where we are right now.”

Behind a Power-T formation full of sweeps and misdirection plays on offense, GFW has averaged 48 points per game behind halfbacks and fullbacks like JC Munoz, Evan Martin, Dominic Henrichs and Ryan Lavrenz, just to name a few.

Munoz and Henrichs are both averaging more than 12 yards per carry this season.

While the Thunderbirds prefer to run the ball, quarterback Brody Hentges has passed for 365 yards and six touchdowns on 28 completions without throwing an interception.

On defense, Munoz is the top tackler with 59 solo tackles and 27 assists while adding four sacks. Blake Schroeder, who picked off two passes against USC last Friday, has seven interceptions this year, while Lavrenz has picked off six passes.

Browerville also runs a Power-T offense, so it should be interesting to see if this Saturday sees a plethora of points put up on the board or if each team can defend each other’s Power-T plays and keep the game a low-scoring affair. GFW has outrushed Browerville in yardage 4,428-2,815 this season.

“We run the Power T and so do they, so it’s the first time we’ll be playing up against it,” coach Hentges said. “Obviously, each of us run a little bit different variation of it, I guess, but they’ve got very talented young men. They play two quarterbacks that have great feet, and their play action is very deceptive. Their running backs run hard, they’re very disciplined, this is one of the more disciplined teams I’ve seen on film, and they’ve got a great offensive and defensive line. Their defense really swarms to the football, they’re very aggressive and they belong where they’re at, and I would argue so do we.”

Coach Hentges also said that he’s not worrying about this meeting with Browerville being a win-or-go-home game and that instead he and the team are just going to enjoy the experience and do what they can.

“This offense, like what they run, they’re going to try to take advantage of your weaknesses,” coach Hentges said. “It could be that their star fullback who rushed for 400 yards the week before might have 50 yards the next depending upon what the team does … we can’t be fooled on that. We’ve got to play aggressive and we’ve just got to enjoy the moment, too, and live within that moment. We don’t talk about do or die or win or go home, we don’t get into any of that crap. We just try to enjoy the day. Somebody asked me if I was ready for Saturday and I said, ‘I’m just excited that I get to go to work on Monday and practice.’ And that’s the way the kids are, too.