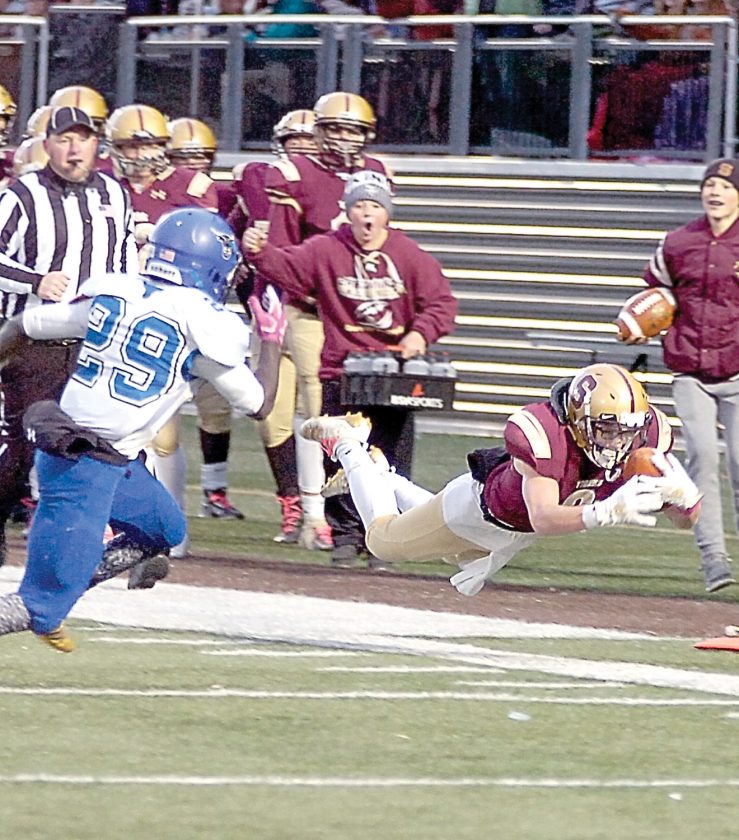 Staff photo by Steve Muscatello Springfield’s Tori Helget dives for a first down during a fake punt in the Section 3A championship game against Martin County West Friday in Marshall.

MARSHALL — Down by 4 points with less than two minutes left in the game, Springfield quarterback Decker Scheffler wasn’t ready for his high school football career to end quite yet.

Scheffler brought the Tigers 80 yards and found Nolan Hovland in the back of the end zone with 15 seconds left as the Tigers advanced to the Class A State Football Tournament with a 23-21 victory over Martin County West at Southwest Minnesota State University.

Scheffler threw three touchdown passes on Friday, the last one sent the Tigers to the state tournament for the second year in a row.

“It was a design scramble play, I always tell my offensive coordinator Adam (Meyer) that I love that play and I want to run it,” Scheffler said. “I told him earlier in the game I wanted to run it and he finally gave it to me and trusted us and I found Nolan in the back of the end zone.”

For Nolan Hovland, it was a dream come true.

“It was an awesome feeling, it’s the kind of stuff you dream about when you’re little to send yourself to state,” he said. “You make those scenarios in the back of your head and it’s cool to see it happen.”

Martin County West nearly played the role of spoiler after Zach Anderson caught a 15-yard touchdown pass from Wyatt Geistfeld with less than two minutes to play. But that was too much time for Scheffler.

The Tigers got on the board early in the first quarter after Scheffler scrambled and found Ivan Hovland in the end zone.

The Mavericks had a golden opportunity late in the half inside the Springfield 10. But they were unable to take advantage of the field position and the drive resulted in a missed field goal from the 6.

The Tigers took advantage of an MCW turnover to start the second half and opened up their bag of tricks. Scheffler threw a 44-yard pass to Jordan Toll to give the Tigers a 17-0 lead.

The Mavericks made their comeback late. With 4:44 left, Payton Anderson caught the Wyatt Geistfeld pass over the middle and fumbled at the goal line. His teammate Miles Fitzgerald recovered the ball in the end zone to trim Springfield’s lead to 17-14.

With a chance to run out the clock, the Tigers turned the ball over on downs at the 38 with less than four minutes left. Geistfeld completed a pass to Derek Dunlop at the Springfield 15 and that led to the Anderson touchdown for the go-ahead score, putting the Mavericks up 21-17.

But Scheffler had more than enough time, orchestrating a drive that led to the 5-yard touchdown pass to Nolan Hovland with 15 seconds to go.

“We knew we were a hurry-up offense and we saw that we had two minutes left,” Scheffler said. “Our offensive coordinator said that was enough time and we moved it down the field.”

For the seniors, it’s especially a big win because they wanted to get back to state after being eliminated in the state semifinals a year ago. The Tigers play Blooming Prairie at noon on Saturday in Janesville in the opening round.

“It’s really awesome, it was our goal since the beginning of the year to get back up there, and now it’s finally happening,” Nolan Hovland said.