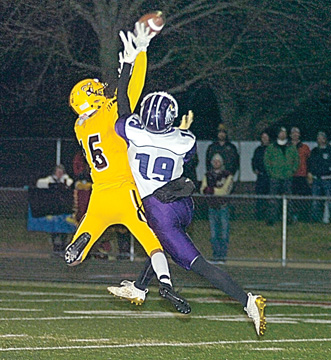 JORDAN — Even with backup quarterback Noah Milhouse running the show, the Jordan Hubmen offense was a force on Tuesday night.

The Hubmen scored three touchdowns on their first 11 plays from scrimmage and rolled to a 49-14 Section 2AAAA victory over New Ulm on Tuesday.

Milhouse threw for four TDs and ran for another and Ryan Samuelson had four TD receptions.

Cole Ranweiler scored a pair of fourth-quarter touchdowns on runs of 25 and 79 yards.

New Ulm ends the season at 3-6. Jordan, the No. 3 seed, travels to No. 2-seeded Marshall for a Saturday semifinal game.

It took the Hubmen one play to score after Jack Newton scored on a 51-yard run.

Jordan then added to the lead on its lead after Milhouse found Samuelson for a 25-yard scoring strike, completing a 6-play, 78-yard drive to make it 14-0 after the 2-point conversion. The two hooked up for a 32-yard scoring strike on Jordan’s next possession, a four-play drive to put the Hubmen up 21-0 with 6:05 left in the first quarter.

It potentially could’ve gotten worse for the Eagles after they fumbled on their own 18, but Jordan fumbled on its first play of that drive and New Ulm recovered.

Milhouse then went untouched for a 20-yard TD with 6:43 left in the half to make it 35-0 to complete the five-play drive.

Later, Milhouse and Samuelson connected for a third time on a 32-yard strike with 4:14 left in the half. The two connected on a 47-yard TD just before halftime for the 49-0 lead at the break.

The Eagles nearly got on the board a couple of times in the third quarter. After Ranweiler’s 50-yard run got ball to the Jordan 11, the Eagles got it down to the 4. But they were unable to punch it in, stalling at the Jordan 5.

Later, the Eagles recovered a fumble on the Jordan 15, and after Nolan Drill carried it to the 2, Ranweiler fumbled at the 1 for another stalled drive.

Ranweiler led all New Ulm rushers with 223 yards rushing on 19 carries, while Nolan Drill had 13 carries for 46 yards.

Teagan Kamm had 14 tackles to lead New Ulm on defense, while Brody Bolduan had 12 tackles.