Cathedral knocks out Sleepy Eye in 4 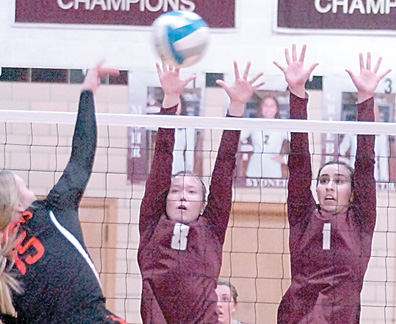 NEW ULM — Getting a solid combined attack from Sarah Mohr and Maggie Fliszar on Monday night was enough to lead the No. 7-seeded Greyhounds past No. 10-seeded Sleepy Eye in four sets of first-round Section 2A, North Subsection volleyball playoff action at Cathedral High School.

The win moves Cathedral (15-11) on to a road meeting with No. 2-seeded Minnesota Valley Lutheran at 7 p.m. on Thursday at MVL High School.

In the fourth set, the Greyhounds built a solid 15-9 lead after an ace serve by Lily Franta, but the Indians were able to claw back and tie it late at 21-all after an ace serve by Sandy Flores and a Cathedral attack error. The Indians took advantage of another late pair of Cathedral errors to lead 26-25 before the Greyhounds got back-to-back kills from Fliszar and a Sleepy Eye attack error to finish the match.

“What we have in mind is just focusing on our side of the net — not focusing on the other team — focus on our controllables and just staying positive,” Mohr said. “We know throughout these playoff games that our mental toughness is going to have to shine through, and the last game just proved that we’re going to have to use that when it’s tight.”

Mohr led the Greyhounds with 19 kills, 14 digs and three ace blocks, while Fliszar added 15 kills and 17 digs. Also for the Greyhounds, Lily Brennan had 42 set assists and 18 digs, while Megan Haala had four ace serves and 11 digs and Sierra Wilson had 21 digs.

While back-to-back kills by Strong had the Indians ahead 11-8 early in the first set, the Greyhounds got a 5-0 run minutes later to lead 15-12. The Indians canceled out that run with a 5-0 run of their own, however, getting a block from Flores to end the run up 17-15 and force a Cathedral timeout.

Four Cathedral errors in a row had the Indians up 22-17 late before the Greyhounds shook off the rust and tied it at 22-all on an ace serve by Brennan. The Indians closed out the set with 3 consecutive points, however, getting an ace serve from Dittbenner to go ahead 1-0 in the match.

While MVL holds a pair of wins over Cathedral this season, Fliszar believes that keeping a strong block going on Thursday will help her team come out ahead this time around.

“I think we just need to block,” Fliszar said about Thursday’s matchup with MVL. “I think we passed really well against them [previously] … our defense is getting better every day, so if we can just keep getting better in these next few days when we practice and then show that out on the court on Thursday, I think we’ll get the win. This is a game we really want, so we’re excited.”