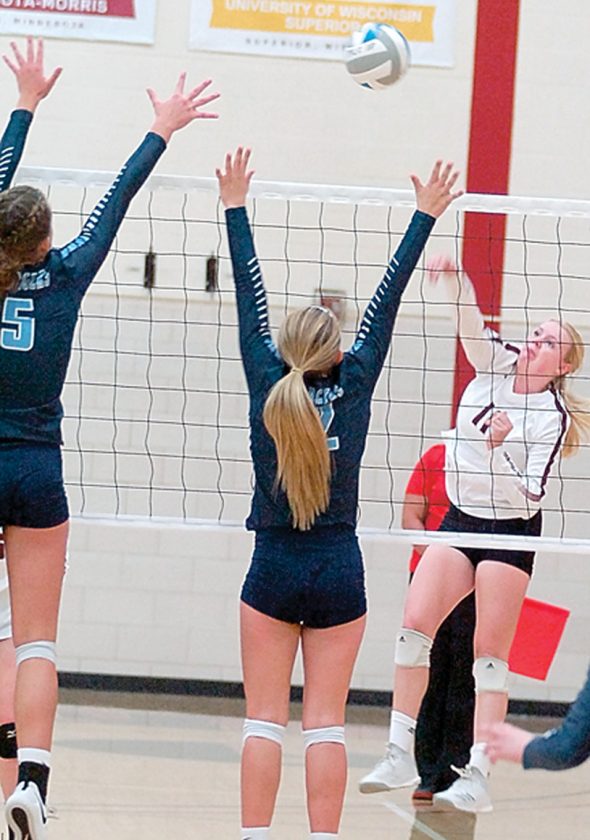 File photo by Steve Muscatello Minnesota Valley Lutheran’s Mara Weisensel, left, and Maddie Pearson, right, attempt to block a spike from New Ulm Cathedral’s Maggie Fliszar in an earlier regular season game this year. The two teams have a chance to meet in the playoffs this season if the Greyhounds can first take down Sleepy Eye at home on Monday.

While the Chargers and Greyhounds will each have at least one home playoff match next week, the Eagles will have to first get through Windom Area on the road to have a shot at hosting a playoff game. All area playoff games next week have a 7 p.m. scheduled start time.

Last year, the Chargers saw a 21-win season end in one match during the Section 2A playoffs. With an ankle sprain keeping top hitter Mara Weisensel out of MVL’s first playoff match with Gibbon-Fairfax-Winthrop and another ankle sprain limiting Lauren Paulsen, the Thunderbirds knocked off the then third-seeded Chargers in four sets.

Outside of missing injured junior outside hitter Rachel Black, the No. 2-seeded Chargers currently have their players healthy and ready for playoffs. Senior outside hitter Haley Herfendal also recently returned from injury after missing most of the season with an ankle injury.

While there is always a chance of a late injury before playoffs like MVL experienced last season, head coach Amy Pearson isn’t planning on pumping the breaks at practice.

“I’ve said any time we do a blocking drill to keep your feet on your side of the net, and hopefully that will help us,” coach Pearson said. “But no, we are not letting up heading into playoffs. I know that the speed of the attack and blocks that we’re going to see is just going to ramp up as we head further into playoffs, so we need to get ready for that. I think we’ve relied on our attack and need to beef up our defense heading into playoffs and be ready for everything we’re going to see.”

The Chargers have set many records this season, including finishing with a 23-4 record, a perfect 8-0 Tomahawk Conference record and a conference championship. Their 23rd win of the year, which occurred this past Monday at home against Madelia, also gave MVL its winningest volleyball season in school history.

“I think it’s an awesome reflection of the amount of time and energy that the girls have put into the volleyball season this year,” coach Pearson said of the records. “They spent a tremendous amount of time in the offseason — two, sometimes three practices a week to get ready for the season. So, I like that you see fruits of your labor. When I make those announcements at practices about the records that are being broken, I always am sure to highlight to the younger players that this didn’t just happen overnight, it’s the culmination of all the hard work that these girls have put into the sport of the volleyball.”

Nelson is also second in team kills for MVL this year with 175 and has 44 ace serves, second on the team to Maddie Pearson’s 49. Maddie Pearson and Nelson also lead the team in digs with 253 and 230, respectively.

While those records can be broken again or the numbers extended with playoffs coming up, coach Pearson and the Chargers are eagerly awaiting to see who they host at 7 p.m. Thursday. New Ulm Cathedral will host Sleepy Eye Monday night, with the winner getting another crack at MVL.

Cathedral dropped two matches to MVL this year, one in four sets and one in five, while Sleepy Eye played the Chargers once this year and were swept at home.

The Cathedral volleyball program has had plenty of success over the years and hasn’t had a losing record since 2012, where the Greyhounds went 11-13-2. That type of success continued this past Monday after the Greyhounds ended their regular season with a home sweep of Mankato Loyola. Cathedral is now 14-11 overall and finished 4-4 in the Tomahawk Conference.

The No. 7-seeded Greyhounds will now host No. 10-seeded Sleepy Eye at 7 p.m. on Monday night. The Greyhounds hold a pair of four-set wins over the Indians this season, with the last meeting between the two squads being in Sleepy Eye on Sept. 26.

Greyhounds head coach Becky Wilfahrt said that she expects the Indians to bring a similar attack to Cathedral on Monday.

“I’ve gone back and watched film, and the information that I have, pretty similar to what they’ve done in the past,” Wilfahrt said of Sleepy Eye. “They like to use their middles, they’ve got [McKenna] Strong in the middle and then [Brittney] Dittbenner. Strong’s a lefty, I think she had most of the kills against us last time. They’ve got a setter [Sandy Flores] that likes to dump, they’re outsides didn’t do a whole lot against us. We had a lot of success serving and we recorded a lot of kills against them. The sets we lost were a lot of unforced errors on our side of the net.”

This time around, unfortunately, the Greyhounds will be without their top setter Emily Schommer, who was lost for the season recently due to a hand injury. Schommer finished her season with 487 set assists.

Freshman outside hitter Lily Brennan, however, has filled in nicely for the Greyhounds as a setter, especially considering her lack of experience at that position.

“She did a nice job the first couple of games, she struggled a little bit the last match, but for not having done any varsity setting or really even practiced that spot — because she had been filling in at middle for Sarah [Mohr] — she’s kind of played every position for us this year,” Wilfahrt said of Brennan. “So she’s done a nice job for what we’ve asked her to do.”

Mohr is back for Cathedral after missing several matches this season due to an early injury. The Greyhounds are 11-2 on the year with Mohr in the lineup and are 3-9 without her.

Mohr currently has 117 kills, 21 ace serves, 16 total blocks and 79 digs in 13 matches this year, while the Greyhounds are led on offense by Maggie Fliszar and Sydnee Helget with 235 kills and 173 kills, respectively. Fliszar also leads the team in digs with 252, while libero Sierra Wilson follows Fliszar in digs with 175 and Helget leads the way in total blocks with 28 1/2.

Wilfahrt said that having Mohr out not only took a very good player away, but it also caused several shifts and forced several players to learn new positions quickly.

While the Greyhounds have 11 losses on the season, they were only swept twice in regular five-set play early in the season against Cleveland and GFW.

Dealing with injuries and having several close matches this year, Wilfahrt said that limiting errors and playing with confidence will be key come playoffs.

“We’ve had a lot of close matches this year, even in the tournaments that we went to, like at Westbrook, everything was coming down to three sets and it was a 2-point set difference or a point difference,” she said. “MVL, we had them down 2-0 and had a big lead in Game 5, even [Sleepy Eye] St. Mary’s, I know it was only four [sets], but they were all very competitive games. We’ve swept them earlier in the season. When our girls are on and they’re playing with confidence, they play really well, and we’ve talked about that a lot throughout the year. Their hitting percentage on nights where they’re confident and they stay strong and aggressive, we hit really well as a team, we serve very well.”

The New Ulm volleyball team started the season off on the right foot with an 8-5 overall record and a 7-0 start in the Big South Conference. Unfortunately, that success hit a wall midseason, with injuries and lineup changes leading to a six-match losing streak.

“There were a couple of things that were out of our control,” Dietz said of the cold spell. “We made a lineup change, we’ve had some injuries with some of our starters that were forced to be sidelined during practice time, things like that. We also kind of got into a rut with our passing being very inconsistent. So when you can’t pass that ball, you can’t run your offense. So it’s just one of those things that we had to overcome some obstacles, and I think we did that in the Bloomington Jefferson tournament [Oct. 12], even though we went 1-3. We played pretty well that tournament, and then having that three-set win over Worthington [Oct. 14]. So I think we’re back to where we need to be.”

The No. 6-seeded Eagles, currently 10-12 overall and 7-3 in the conference, have one final regular season home game with Redwood Valley at 7:30 p.m. Monday before traveling to take on No. 3-seeded Windom Area in Section 3AA playoff action at 7 p.m. Thursday. The Eagles will be looking to win that final regular season game in hopes of matching last season’s 11 wins before they look to win their first playoff game since 2011, where New Ulm defeated St. James Area in a sweep at home.

In order to do that, New Ulm will have to look to have continued success with its block and clean up its passing. The Eagles opened the 2019 season with a three-set road loss to Windom Area on Aug. 24

“They’re a tough team,” Dietz said of Windom. “That was a learning match for us [Aug. 24], and then after that match, we went on a pretty good run for a little bit. But there are some things we need to take care of on our end, such as making sure we pass the ball, serve aggressively, and we move the ball at the net and utilize all of our hitters. And we’ll need to make sure that we set up a nice block on their middles. They have got some pretty good middles, so it’s going to be shutting down their key hitters.”

This season, the Eagles are led by Nora Windschill’s 175 kills, 184 digs and 26 ace serves, while Natalie Yackley leads the team in set assists and ace serves with 360 and 28, respectively. Caitlyn Todesco leads the Eagles in digs with 187, while Riley Melby is the team’s top blocker with 23 blocks.