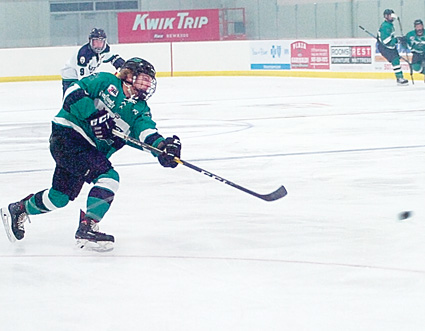 “I do not know if we necessarily deserved to win that game,” he said. “But the best teams every year can find a way on their worst nights to win.”

Michael Savelkoul’s goal off a pass from Jacob Halvorson tied the game at 2-2 with just over nine minutes left in the game and Halvorson’s power-play goal four minutes later gave the Steel a one-goal lead as they went on to win 3-2.

Glavine Schugel also added a goal as the Steel improved to 4-2 on the season.

Steel goalie A.J. Cohen was outstanding in the nets, stopping 33 of 35 Blizzard shots.

Carter Rieland’s power-play goal at the 9:08 mark of the second period gave Alexandria a 2-1 lead.

Stepan said that the first two periods were not the best for his team. “And a big part of that — and I will put a part of that on myself — is the first two periods we cheated the game a little,” he said. “This was our first game on the Olympic sheet of ice. Guys think that they have more time than they have on a regulation NHL sheet. But we found a way to come out in the third period and I felt we played really well in that period.”

While a solid third period helped the Steel, the play of Cohen in the nets spelled the difference in the game.

“The only reason we won the game was because of A.J.,” Stepan said. “He did more than I could possibly ask of him to do. He was the main reason we were even in that hockey game in the third period.”