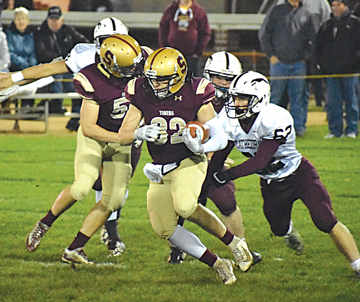 Staff photo by Jeremy Behnke Springfield’s Mason Rummel finds an opening in the New Ulm Cathedral defense on Wednesday night as the Tigers defeated Cathedral 34-0 at Riverside Park in Springfield.

SPRINGFIELD — Heading into the final game of the regular season, the Springfield football team wanted to do a couple of things — lock up the No. 1 seed in Section 3A and stay healthy.

Despite a couple of players missing some time in Wednesday’s game due to some injuries, the Tigers managed to accomplish both feats, finishing the regular season with an 8-0 record after defeating New Ulm Cathedral 34-0 at Riverside Park.

The Greyhounds held the potent Tigers offense scoreless in the first quarter, but after that, it was all Springfield. Decker Scheffler scored Springfield’s first touchdown with 7:21 left in the second quarter to put the Tigers ahead 7-0 after the PAT by Mark Peschges.

The Tigers added to their lead just before halftime after Scheffler completed a pass to Kadin Johnson and Johnson outraced the Greyhounds to the end zone. The 66-yard touchdown put the Tigers ahead 14-0 with 54 seconds left in the half, a lead Springfield took into the break.

The Greyhounds fumbled on their first possession of the second half and that set the Tigers up for another score. There, Scheffler scored his second touchdown of the game, an 8-yard run, with 11:32 left in the third quarter to put the Tigers up 21-0 after the Peschges PAT.

Mason Rummel scored the final touchdown of the game with 9:36 left in the fourth quarter on a 1-yard run.

The Greyhounds had four turnovers in the game and the Tigers turned the ball over once.

For the Greyhounds, Eric Furth and Luke Gieseke led the way on the ground (no final stats were totaled up). Chris Knowles had 12 tackles while Luke Mages and John Kretsch each had eight tackles.

Springfield has a first-round bye on Tuesday for the Section 3A playoffs and will wait until next Saturday to play its first game.

Cathedral (2-6) will open Section 2A action on Tuesday against an opponent to be determined. Playoff seedings will be determined Thursday.