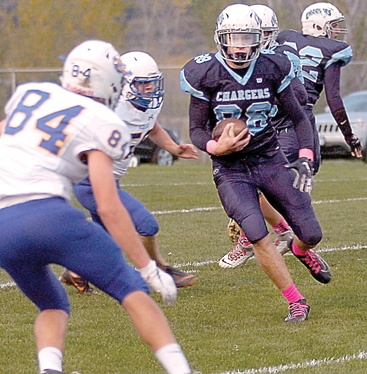 NEW ULM — Mason Cox passed for 163 yards and three touchdowns — all to wide receiver Jace Marotz — and then ran for another touchdown as Minnesota Valley Lutheran rolled by Adrian Area 30-13 Wednesday night at Johnson Field in a Southwest District, East Subdistrict football game.

Cox hit Marotz for touchdown passes of 14, 49 and 6 yards and then scored on a 21-yard touchdown run with just over four minutes left in the game. Marotz finished with nine catches for 118 yards.

For MVL head coach Jim Buboltz, this was the complete game that his team has been waiting for all season.

“We have been waiting for this one tonight,” Buboltz said. “I was so proud of the way that our guys took charge in the second half (outscoring Adrian 24-6). We had opportunities in the first half that we did not take advantage of, but in the second half we controlled both sides of the ball.”

Adrian took a 7-0 lead with 36 seconds left in the second quarter on a Brandon Schnoor 12-yard run and a Brady Vortherms kick.

Adrian increased their lead to 13-6 early in the third quarter on Schnoor’s second touchdown run of the game, this one from a yard out.

But after that, the rest of the second half and the game was dominated by the Chargers.

MVL responded to the score with a five-play, 62-yard drive that culminated with Cox and Marotz hooking up a second time from 49 yards out.

“It was a bubble screen,” Marotz said. “I trusted my blockers and coach always said to get outside to get the edge. We wanted to get outside because we knew that we had some speed.”

“Myself and Mason have been that kind of duo since we were in eighth grade,” Marotz said. “We just wanted to keep it simple and do what we do.”

Cox then secured the win with a 21-yard gallop down the right sideline for a 30-13 lead.

“I was just trying to stay inbounds and get a first down,” Cox said. “I got that first down and saw more yards, kicked it into extra gear and saw the end zone.”

Marotz added that the win by MVL totally changes the playoffs and gives the team a lot of momentum heading into playoffs.

“Our three captains, Mason, Jace and Colton Collum led the way tonight,” Buboltz said. “This win is going to make Thursday morning interesting when the seedings come out.”