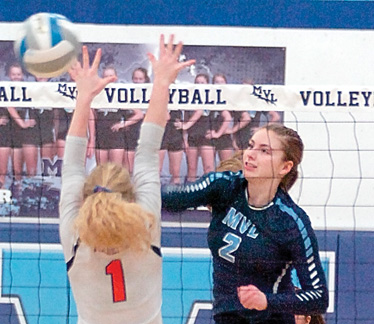 And for the second year in a row, the Chargers ended their regular season unbeaten at home, going 6-0 on their home court this year.

“I think that it definitely helps the girls playing in front of the home crowd,” MVL head coach Amy Pearson said. “To have that behind them, we’ve been at some other gyms that definitely have the home-crowd favor and we’ve seen what that’s like, and so it’s nice when we get to play at home. We didn’t have that many home games this year, so we like to finish up on a good note.”

Madelia was led by Brooke Lensing and Kylie Smith, who each had five kills, while Emily Stevenson had 16 set assists and Dora Facundo had 10 digs.

The Chargers grabbed an 11-6 early lead in the first set after a Madelia attack error, but the Blackhawks got back-to-back kills by Lensing and turned that into a 4-4 run to trail 11-10. MVL answered with a 5-0 run to lead 16-10, however, getting a kill each from Weisensel and Abbie Riederer and an ace serve from Nelson during the run.

MVL pushed its lead to 11 before Madelia got a 7-1 run to cut the deficit to 23-18, but a Madelia service error and an MVL ace ended the set.

Trailing 3-1 in the second set after an ace serve by Malia Schwanke and a pair of errors, MVL got a 3-0 run to lead 4-3 after a block by Herfendal. Lensing answered that block with a block of her own to tie it at 4-all.

Both squads remained close on the scoreboard before a 4-0 run, highlighted on back-to-back ace serves by Nelson, put MVL up 14-9. While MVL committed several errors after that, it finished the set on a 5-0 run for a 2-0 match lead.

Madelia led 3-0 to start the third set after a kill by Lensing and a pair of MVL errors. MVL rebounded in the middle of the set, though, getting a 9-1 run to lead 18-10. During the run, Nelson had a trio of kills, while Weisensel added two.

Madelia got a kill by McKenna Hennager and a pair of MVL errors after that run, but the Chargers finished the sweep with a 7-1 run.

“Volleyball is such a game of momentum, that if you get it going in your favor, it’s a lot easier to keep feeding on that,” coach Pearson said. “But the opposite can happen as well, which happened a little bit in that second game, where we missed a couple serves here and there, or we pushed when we should have hit or tipped when we should have swung at it. It just piled up a little bit, but our team is always resilient, we get our backs against the wall and we’ll come back swinging.”

MVL now awaits playoffs and has a strong chance of getting another first-round bye, much like it did last season. Madelia (0-25) hosts Alden-Conger at 7 p.m. Tuesday.