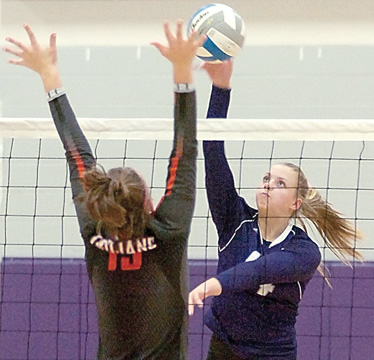 NEW ULM — After hitting a rough stretch late in the season, the New Ulm volleyball team needed a sweep on Monday night, and that’s exactly what the Eagles got.

New Ulm swept Worthington 25-21, 25-9, 25-23 to snap a four-game losing streak in the Big South Conference. Coming into Monday’s match, the Eagles had lost seven of their last eight matches overall.

“In all honesty, we hit a wall, we had to make a rotation adjustment and we’ve been battling some injuries,” coach Stef Dietz said of the stretch. “This was a good win for us, we played hard, we played well and the third game we got a little bit comfortable. But we came back and we got the win.”

Even though it was a sweep for the Eagles, it wasn’t exactly easy. They had a back-and-forth battle in the first set, trailing 5-3 early on. A couple of hitting errors by the Trojans and a kill by Ally Steffensmeier made it 6-5 in favor of New Ulm.

The teams traded points most of the set, but at 21-21, the Eagles put it together and finished strong with a 25-21 win, thanks in part to kills by Riley Melby and Windschill to end the set.

“It was good, we were in pretty tough tournament this past weekend [New Ulm went 1-3 at the Bloomington Jefferson Tournament] where our passing was off,” Dietz said. “Tonight I thought we passed a lot better. Once we passed, we obviously can run our offense.”

New Ulm dominated the second set and jumped out to a 4-0 lead. New Ulm eventually led 10-2 and 20-7, finishing the set on a pair of aces from Windschill.

Neither team was able to get much separation in the third set. The Trojans seemed to run their offense better and there were 11 ties in the set. However, with the set tied at 23-23, the Eagles went ahead by one point and finished the match on a hitting error.

New Ulm has almost a week off before hosting Redwood Valley next Monday.