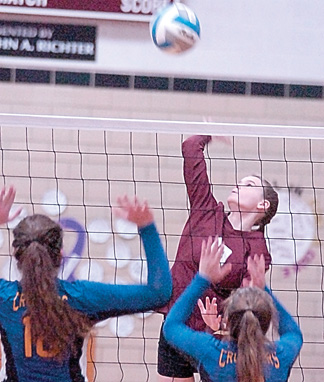 It was the regular season finale for the Greyhounds, who are now 14-11.

The Greyhounds jumped out to an 8-0 lead in the first set. After Loyola earned a point, Cathedral went on a 6-0 run for a 14-1 lead. The Greyhounds played nearly flawless during the set and they finished with a 15-6 run.

“We did a good job of swinging,” Cathedral head coach Becky Wilfahrt said. “We fought through the adversity and we stayed aggressive.”

Cathedral continued its good play when it build a 7-0 advantage in the second set. The tide turned in Loyola’s favor when it got within one point on an ace serve by Hailey Barker. Sami Naples tied it on a kill. A Cathedral hitting error gave the Crusaders their first lead of the contest at 24-23.

A Loyola player knocked the ball into the net to tie it at 24-24. A double hit violation by Loyola and a kill by Sydnee Helget were the final two points that Cathedral needed to take the set.

Loyola held the lead twice and there were four ties early in the third set. The Crusaders’ final lead was 4-3 when a Cathedral player missed the ball at the net. Cathedral went on a 5-0 run to start to pull away from Loyola.

Cathedral led 20-11 when the Crusaders made another run. Megan Frutiger had two consecutive tips to close the gap to 23-20. Sarah Mohr tipped the ball between two Loyola defenders and Frutiger knocked the ball out of bounds giving Cathedral the final pair of points necessary for the victory.