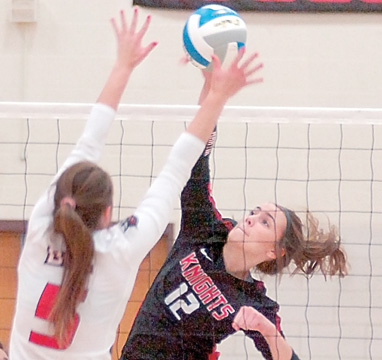 The first set was competitive with MLC leading for most of it. BLC battled back by taking advantage of a net serving error, an unforced error and tips by Haley Domonoske and Mindy Poehler tied it at 22-22.

MLC tied it again at 24-24 on a tip by Alyssa Heckendorf. MLC knocked the ball out of bounds and a miscue gave the Vikings the final two points they needed to win the set.

BLC jumped out to an early 6-0 lead in the second set. Two points came on consecutive service aces by Alexis Morsching. The Knights closed the gap with an ace serve by Jewel St. Germaine and a double front line block making it 14-13 BLC.

The Knights tied it at 16-16 late when BLC hit the ball out of bounds. Poehler’s kill regained the lead for BLC. The Vikings went on a 9-4 run to take the set.

MLC’s final lead was 2-1 on a Viking service error in the third set. A tip by Poehler tied it and later Poehler and Megan Rutt earned a point on a double block at the front line to regain the lead for BLC at 7-6.

Later, Poehler regained the lead for the Vikings on tip. Morsching’s kill gave BLC a lead of 9-7 that it would not surrender. A tip by Domonoske increased the lead to 16-9 for BLC later in the set. The Vikings went on a 6-0 run for the set and match win.