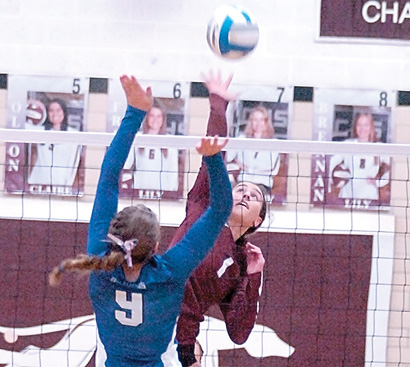 “We are pleased with how we played and how it went,” Cathedral head coach Becky Wilfahrt said. “Our hitters played well as did everyone else tonight.”

Cathedral took the lead in the first set on a Nicollet hitting error. The Greyhounds went on a 9-3 run for a 12-5 lead. Nicollet closed the gap later to 20-16 on a Jill Thompson kill. Mohr earned a Greyhound point on an ace serve. Nicollet was unable to return the ball two plays later and Cathedral won the set.

The Greyhounds jumped out to a lead early in the second set. Nicollet clawed its way back tying things at 11-11 on an unforced error by Cathedral. Nicollet took the lead on a tip by Jill Thompson. Nicollet knocked the ball out of bounds to tie it again. Cathedral put together a 13-5 run to take the set.

Nicollet tied it once early in the third set. The Raiders were unable to get the lead due to a combination of Nicollet errors, good defense by Cathedral and earning points at key times during the set.

Nicollet cut the gap to 19-12 on Olivia Whitmore’s kill. After a good volley, a Nicollet player tipped the ball in between Cathedral players. Hulke’s ace serve later brought Nicollet to within 3 points at 21-18. Jill Thompson smashed the ball out of bounds for the set point and match point.