TMB offense too much for Chargers 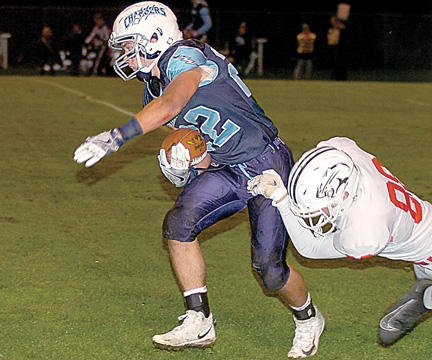 Staff photo by Steve Muscatello Minnesota Valley Lutheran’s Colton Collum tries to break away from Trayton Radke of Tracy-Milroy-Balaton during the second quarter Friday at Johnson Field in New Ulm.

The Chargers scored the first touchdown of the game, then watched TMB take over from there. The Chargers missed their share of tackles and that led to longer drives that the Panthers used to their advantage. It was a frustrating loss as the Chargers saw their record slip to 1-5 with two games left in the regular season.

“Obviously a captain has to show leadership and I think they’ll [the rest of the MVL squad] look to all three of our captains for leadership,” senior captain Colton Collum said. “We need to have a better mentality and pump our kids up, they weren’t ready mentally. Every time they got down on themselves, they just kept getting more down and we need to fire them up.”

Collum scored two touchdowns on the night, the first on a 14-yard reception in the first quarter to give the Chargers a 7-0 lead with 4:47 left. He later added a 56-yard touchdown run in the third quarter, but at that point, the Chargers trailed 36-21.

Jake Tauer scored four touchdowns for the Panthers and passed for another score.

Jace Marotz scored on a 41-yard reception in the third quarter for the Chargers.

Up 7-0, MVL watched TMB score late in the first quarter after Tauer caught his first touchdown pass of the night, a 34-yard reception from Sawyer Otto as time expired. The 2-point conversion gave the Panthers an 8-7 lead after the first quarter.

Ayden Horner gave the Panthers a 14-7 lead after he scored on a 5-yard run. The 2-point conversion made it 16-7 and later, Otto scored on a touchdown pass from Tauer to make it 22-7 at halftime.

“I think after we scored that first touchdown we slowed down, we needed to keep going at that pace, keep going fast and hard, again, it was all mentality,” Collum said.

The Panthers scored on their first drive of the second half after Tauer was wide open on a slant for a 10-yard score to put them up 28-7. MVL retaliated with a 41-yard pass to Marotz to make it 28-15 and the Chargers recovered the ensuing onside kick.

Mason Cox then found Carlos Ramirez for a 40-yard pass to get deep into TMB territory, but the drive stalled at the 7.

The Panthers took over and marched 93 yards to go up 36-15 on Tauer’s third touchdown of the game from 25 yards out.

“I had some nice blocking up front, I had Luke Thompson up front and [Kaiden] Hammerschmidt blocking downfield, I could make some moves and get to the outside,” Collum said.

Tauer caught his fourth touchdown pass of the game in the fourth quarter for the final 44-21 margin.