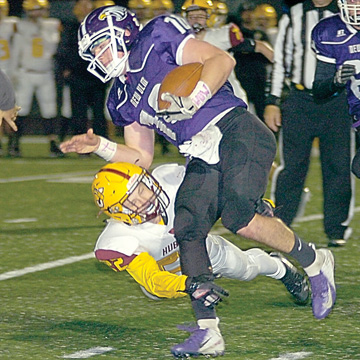 NEW ULM — Noah Milhouse passed for two, first half touchdowns and ran for another as Jordan built a 27-14 halftime lead and then scored on a late fourth quarter interception to New Ulm 33-14 Friday night in a South Central District-Red Division game.

Milhouse scored on runs of 1 and 9 yards and completed a 35-yard scoring pass to Thomas Dietel in the first half.

One of New Ulm touchdowns was scored by Isaiah Miller on an 8-yard touchdown pass from Nolan Drill. Cole Ranweiler scored the other Eagles touchdown on a 3-yard run. Drill added a 2-point conversion run.

For the game, Drill carried the ball 22 times for 152 yards, while Ranweiler rushed for 111 yards and a touchdown on 25 carries.

“We played really hard tonight and a couple of turnovers cost us,” New Ulm head coach Eric Kauffmann said. “We had the perfect game plan of slowing them down and we did in the first half, but we answered back and that was the big key.”

Milhouse got the Hubmen on the board on a 1-yard run that capped a 53-yard drive for a 7-0 lead.

But New Ulm countered with a 75-yard, eight-play scoring drive that ended when Isaiah Miller caught a tipped pass from Nolan Drill for a 8-yard touchdown pass. Drill scored the 2-point conversion for an 8-7 New Ulm lead.

But Jordan marched back to take a 14-8 lead on a 1-yard run from Macauley Bartells.

The Hubmen added a 35-yard touchdown pass from Milhouse to Dietel for a 20-8 lead.

The Eagles countered to close that lead to 20-14 when Cole Ranweiler scored on a 3-yard run with just under five minutes left in the first half.

Milhouse increased the Hubmen’s lead to 27-14 on their next possession just 40 seconds after Ranweiler’s score for the 13-point lead at the break.

But those points would be the last points scored by the Jordan offense in the game as the Eagles’ defense kept the Hubmen out of the end zone in the final 24 minutes.

Unfortunately, the Eagles offense also did not score in the second half due in large part to New Ulm turnovers.

“They kicked off to us to start the second half and we turned the ball over on our first possession,” Kauffmann said. “Our whole objective was to control the ball and use as much time off the clock as we could.”

The Eagles saw a 14-play drive that started on the New Ulm 39-yard line and got to the Jordan 7-yard line end when the Hubmen defense held them on a fourth and 1 midway through the final quarter.

Jordan got their only touchdown of the second half on a 78-yard interception return by Kade Noyes with under a minute left in the game.

“On their last touchdown, we are trying to do something that we are not great at doing,” Kauffmann said. “We knew that we could move the ball on them and we knew we could. We just could not get the big stops when we needed in that first half.”