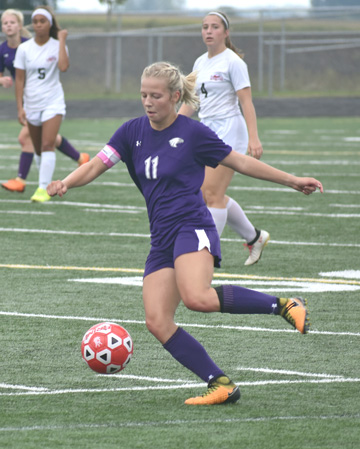 NEW ULM — With two weeks left in the regular season, the New Ulm girls’ soccer team wants to head into the playoffs with a strong finish.

New Ulm took big step towards that goal with a 3-2 victory over Mound Westonka on Saturday at New Ulm High School. It was the second straight win for the Eagles (7-4-1), who travel to Waseca on Monday. The Eagles defeated Waseca 6-2 this past Thursday to snap a two-game losing streak.

New Ulm got the first goal of the game 11 minutes in after Livia Reinarts took a pass from Madison Roufs and found the back of the net to make it 1-0.

About 13 minutes later, the same two reversed roles and Roufs scored on an assist from Reinarts to give the Eagles a 2-0 lead.

Mound Westonka got a goal later in the half, but New Ulm took a two-goal lead again in the second half after Brynn Nesvold scored off of Reinarts’ second assist of the game.

Mound Westonka added a goal to its total later and the Eagles held on the rest of the way.

New Ulm is at Waseca on Monday and at Marshall on Thursday.