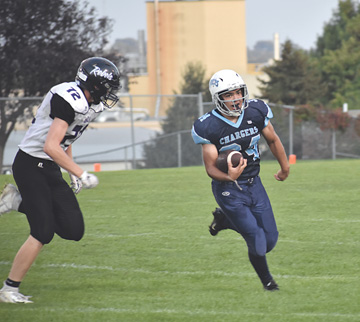 Minnesota Valley Lutheran running back Carlos Ramirez tries to get to the outside on Saturday night against Murray County Central at Johnson Field.

NEW ULM — In the first quarter of their game with Murray County Central, the Minnesota Valley Lutheran Chargers forced three Rebel turnovers and scored two touchdowns to take a 14-0 lead after the first 12 minutes.

After that it was all Murray County Central.

The Rebels scored five touchdowns and shut down the Chargers offense as they came away with a 33-14 win over MVL Saturday night in a Southwest District-East game.

Dylan Johnson scored two touchdowns for MCC (3-1) on a 3-yard run and a 25-yard pass from Blake Schmitz. Schmitz added a 1-yard scoring run. Aaron Johnson found the end zone twice on a 50-yard pass from Schmitz and a 23-yard run.

Mason Cox and Colton Collum scored the MVL touchdowns, both in the first quarter.

Cox scored on a 52-yard run and then tossed a 26-yard scoring pass to Collum.

“We got off of the bus right away and made a couple of big plays early,” Chargers coach Jim Buboltz said. “That was good to see and it got things going for us offensively right away.”

And it was a first quarter dominated by the Chargers.

But after the first quarter, it was all Murray County Central both offensively and defensively.

The Rebels cut the lead to 14-6 early in second quarter on a Schmitz 1-yard run.

After Aaron Johnson recovered an MVL fumble, the Rebels scored to cut the lead to 14-12 on a 50-yard pass from Schmitz to Aaron Johnson.

Murray County Central then recovered an on-side kick at midfield and five plays later were in the end zone on a 25-yard pass from Schmitz to Dylan Johnson to give the Rebels a 20-14 halftime lead.

“We were up 14-6 and had a first down and we fumbled and we never got the ball back in the first half,” Buboltz said. “It was a turnover at a tough time.”

The Rebels upped that lead to 26-14 following another MVL turnover when Dylan Johnson broke in from three yards out.

Murray County Central capped the scoring at the 3:20 mark of the fourth quarter on a 23-yard run by Aaron Johnson.

“They got it in their heads that they were going to power the ball at us,” Buboltz said. “We had a tough time stopping them. In the second half we did not have the ball in great field position. We did not get things rolling after the first quarter.”