Knights pick up win over GHEC/T 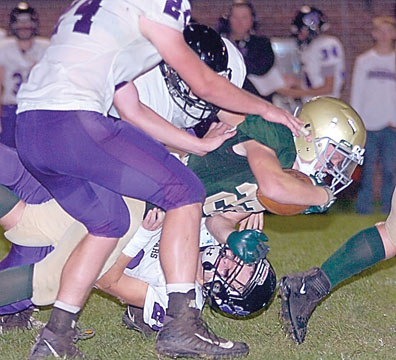 Staff photo by Steve Muscatello Sleepy Eye St. Mary’s running back Trent Steffensmeier stretches for an extra yard during a run in the fourth quarter against Granada-Huntley-East Chain/Truman Friday in Sleepy Eye.

“Our defense played well the whole game,” St. Mary’s head coach Brent Kucera said. “They have a phenomenal quarterback and running back, and we were able to contain them.”

St. Mary’s struck first at the 10-minute of the first quarter on a 28-yard touchdown pass from Carson Domeier to Marcus Lang. Domeier’s kick for the extra point was no good.

Spencer Hoffmann picked off a Jaguar pass and he returned the ball to their 19-yard line. Four plays later, Domeier scored on a 1-yard run. Domeier’s kick gave the Knights a 13-0 advantage with 6:05 remaining in the first half.

St. Mary’s was not perfect because it had three holding penalties in the second quarter during a drive. A pass interference penalty was called on the Jaguars which put St. Mary’s close to the end zone. GHEC/T’s defense denied St. Mary’s a touchdown. Domeier kicked a 22-yard field goal for a 16-0 St. Mary’s halftime lead.

Late in the third quarter, Jaguar quarterback Owen Wolter scrambled and he was brought down at the Knights’ 36-yard line.

Two plays later, Wolter tossed a 36-yard touchdown pass to Carter Spear with 3:55 remaining. Wolter tried to pass for the 2-point conversion but a St. Mary’s defender knocked the ball down. The Knights led 16-6.

St. Mary’s took the ensuing kickoff and it answered with its own scoring drive. Trent Steffensmeier ran the ball twice which kept the drive alive. Domeier passed to Blake Steffensmeier for a first down. Domeier threw a 4-yard touchdown pass to Nick Labat as the third quarter was winding down. Domeier’s kick was good for the extra point.

St. Mary’s (2-2) will host Edgerton/Ellsworth on Friday in the Knight’s homecoming game.