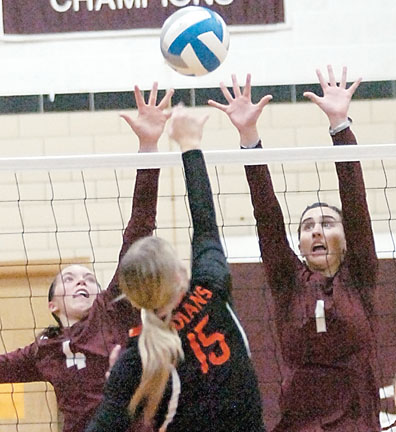 It was the fourth consecutive win for the Greyhounds and the fourth loss in a row for Sleepy Eye.

“We started off with a slow start,” Greyhounds head coach Becky Wilfahrt said.

She noted that Mohr’s return, while welcome, had her team adjusting as the match unfolded.

Things started out well for Sleepy Eye in the first set. It led 10-4 early and finished strong with an 11-4 run. The Greyhounds had one lead early, but Sleepy Eye tied it, took the lead and won the set.

“We started out well, and we were relaxed,” Indians head coach Sydney Geiger said. “We lost our focus and we didn’t make the adjustments as the match was going on.”

Dropping the first set served as a wake-up call for the Greyhounds going into the second set. Cathedral grabbed the lead when a front row player softly dropped the ball over the net, making it 5-4. Cathedral played some solid defense and it took advantage of errors by the Indians. Lily Franta scored on an ace serve for a 17-8 advantage. Two unforced errors, a double block at the net and a kill all contributed to the Greyhounds leading 21-8. Cathedral outscored Sleepy Eye 4-2 to claim the second set. Sleepy Eye’s final lead was 3-2 in the second set.

The two teams started the third set playing even throughout. Cathedral started to pull away by engineering a 10-4 run. It earned points when needed, not allowing Sleepy Eye an opportunity to get close (or tie) the set.

The fourth set was another close one with the teams exchanging points. At the midway point, there was a good volley with Cathedral earning the point. Sleepy Eye managed to close the gap to 3 points when it dropped the ball inbounds. That made the score 17-14 Cathedral.

Cathedral’s defense created points by either getting Sleepy Eye to commit an unforced error, or the Greyhounds were able to block the ball and set up returns which earned points.

A spike by a Cathedral defender was the exclamation point giving it the set and the match victory.

Cathedral (5-7, 2-1) will participate in the St. James Invitational Tournament on Saturday. Sleepy Eye (5-5, 0-2) will host Minnesota Valley Lutheran on Thursday.