Huskies power past Eagles in 3 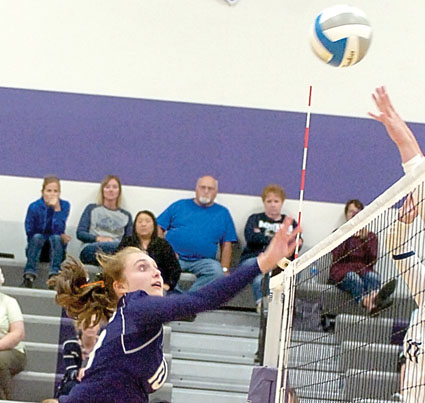 The Huskies were aggressive nonstop on Monday, which made for a good balance of kills and forced New Ulm errors.

“We would have had to have played some very good defense [to win], and at times we did because we set up a nice block, we dug fairly well, we passed fairly well, but they’re a very good team,” New Ulm head coach Stef Dietz said.

Also for the Eagles, Caitlyn Todesco had eight digs, while Nicole Albrecht had six digs and two ace serves.

JCC stormed out early in the first set to lead 6-1 after kills from Sadie Voss and Alicia Brandt, both members of JCC’s front line. Three straight points for the Huskies later put them up 14-7 to force a New Ulm timeout.

The timeout paid off for the Eagles as they were able to mount a comeback with a 4-0 run to force a JCC timeout.

The run included a kill by Windschill and a block apiece from Hoel and Windschill.

The Huskies got kills from Brandt and Voss out of the timeout, however, and built a 20-15 lead to force another New Ulm timeout. The Eagles weren’t able to mount much offense after their second timeout, though, and a kill by Voss ended the set after several late New Ulm errors.

The Eagles looked stronger in the second set and built a 9-6 lead early on after a tip over the net from Munson, a kill by Hoel and a JCC attack error. JCC benefited from multiple New Ulm attack errors, though, to go on a 7-1 run for a 13-10 lead.

The Eagles got a 5-0 run to retake the lead, 15-13, but the Huskies clawed back to lead 20-17 after a 4-0 run that was capped off with a kill from Georgianna Wenzel after 30 seconds of back-and-forth volleys and attacks between the two teams.

New Ulm cut its deficit back to a point late after an ace serve from Hoel, but the Huskies ended the set shortly after.

Set 3 saw each member of the Huskies’ front line on court start with a kill for a 3-1 lead. The Eagles then got a 5-0 run to take a 7-5 lead after a kill from Windschill, an ace serve from Albrecht and a kill by Melby, but the Huskies got a 5-0 run of their own to lead 10-7.

JCC then forced several New Ulm errors and continued to build its lead the rest of the set.

Despite being swept, New Ulm didn’t make things easy on JCC for the most part and Dietz was still able to take away some positives from the loss.

“We didn’t quit, we served very well, I thought for the most part we passed pretty well,” Dietz said. “We couldn’t really get our offense going as much as we would like, we spent a lot of time on the defensive end, but we set up a nice block and they had to work to move, they had to work to hit the ball around us. But Jackson’s a very good team and we did what we could.”

New Ulm is at St. Peter on Tuesday.